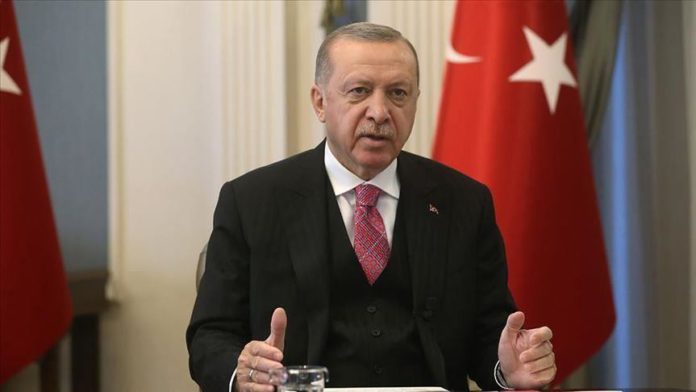 The Turkish president on Saturday remembered the Srebrenica martyrs on the 25th anniversary of the  genocide.

“We will always stand by our Bosnian brothers in their search for justice. The Srebrenica Genocide will never be forgotten,” Recep Tayyip Erdogan said in a video message.

As part of the 25th anniversary of the Srebrenica Genocide, Erdogan spoke via video link at the memorial ceremony held at the former accumulator factory used by the United Nations troops as a base in the war in Bosnia.

Erdogan stressed that despite all tragedy and tears, European politicians have learned no lessons from Srebrenica Genocide, adding that free use of words that “fuel enmity towards Islam and support xenophobia is source of concern for our future.”

“Even though it has been a quarter of a century since the genocide, our pain is still fresh. Our hearts wrenched with every mass grave unearthed,” he said.

Erdogan wished God’s mercy on Srebrenica martyrs and patience to their families, their loved ones and to all who feel pain in their hearts.

Later, Erdogan posted a video on Twitter commemorating the victims of the Srebrenica Genocide.

“Be sure, we here felt in our hearts all the sorrow you suffered that day, along with the desperation of being far away,” he said.

“I hope that pain and suffering that happened here never comes to pass again in any other region in the world.”

*Writing by Havva Kara Aydin and Dilara Hamit in Ankara