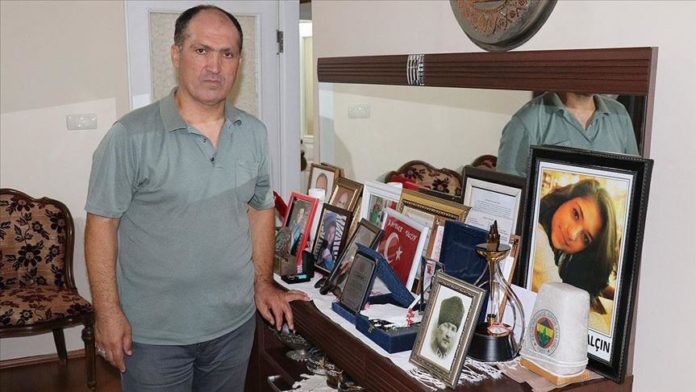 Three years after her heinous killing by the PKK terror group, the family of teacher Senay Aybuke Yalcin remembered their daughter on her birthday Thursday in the Black Sea province of Karabuk.

The 22-year-old music teacher was killed in a bomb attack in Batman province.

Sadik Yalcin, Aybuke’s father, told reporters this was the fourth birthday of Aybuke since the terrorist attack took her away on June 9, 2017.

“The treacherous attempts of the curse called the PKK that have been on our country for 40 years have left many mothers and fathers distraught,” he said, adding they are one of those grieving families.

“Every moment of her absence gives us pain,” he added.

He said Aybuke would always be excited about her birthdays and would ask what preparations were being made for her.

“She would not ask for much. She usually celebrated her birthday with her friends. She liked to celebrate it among a crowd,” he added.

Sevda Helvaci, Aybuke’s roommate and classmate at her university, said they lived together for four years.

Helvaci said Aybuke was a very active and cheerful person.

Aybuke succumbed to her wounds in the brazen attack targeting the car of the mayor of Kozluk district in Batman. She was riding a minibus which was part of the convoy.

The perpetrator of the attack was neutralized in March 2018 by Turkish security forces.

In its more than 30-year terror campaign against Turkey, the PKK — listed as a terrorist organization by Turkey, the US and the European Union — has been responsible for the deaths of nearly 40,000 people, including many women and children.