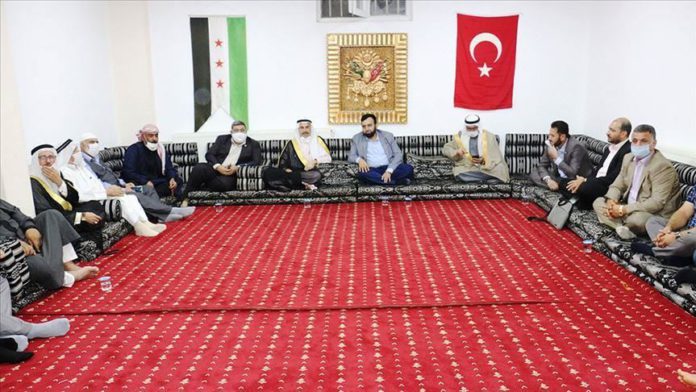 Fifty Syrian tribal leaders on Monday condemned the YPG/PKK terror group, as well as Armenia in its conflict with its neighboring Azerbaijan.

Gathering in southeastern Turkey, the leaders who hailed from different regions across Syria expressed in a joint statement their gratitude to Turkey for providing humanitarian aid since the beginning of the Syrian Civil War.

One of the participants, Hassan Dugaym, read the statement following the meeting in the Karakopru district of Sanliurfa province.

“Of course, things will be back on track in Syria one day. Terrorist organizations supported by the West now take part in Armenia’s attack on Azerbaijan. Our Muslim brothers and sisters in Azerbaijan pass through tough times as a result of the Armenian attacks. However, oppressed peoples will prevail eventually,” said Dugaym.

In its more than 30-year terror campaign against Turkey, the PKK — listed as a terrorist organization by Turkey, the US and EU — has been responsible for the deaths of nearly 40,000 people, including women, children and infants. The YPG is the PKK’s branch in Syria, just across Turkey’s southern border.

Relations between the two former Soviet republics of Armenia and Azerbaijan have been tense since 1991, when the Armenian military occupied Upper Karabakh, an internationally recognized territory of Azerbaijan. Fighting re-started on Sept. 27 when Armenian forces targeted Azerbaijani civilian settlements and military positions, leading to casualties.

Following the meeting, some other tribal leaders also expressed their reactions in brief addresses.