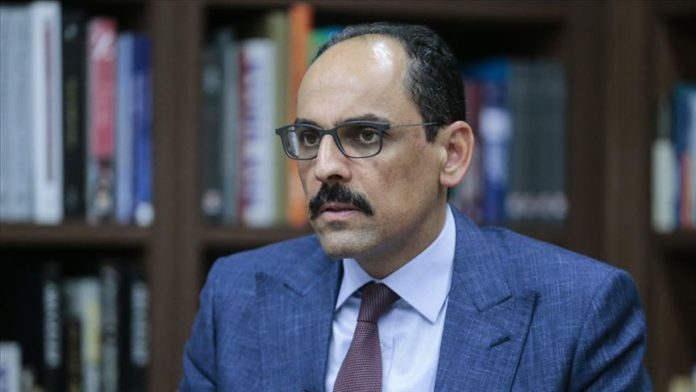 Turkey supports a diplomatic solution to end the Armenian occupation of Nagorno-Karabakh and is calling on the Minsk Group to find a new proposal, said Turkey’s presidential spokesman on Friday.

“We call on the Minsk Group to come up with a timetable and a new proposal that is actionable, that has specific guidelines to end the current round of hostilities but most importantly also a way to end the occupation of Azeri lands by Armenia, which has been the root cause of this problem,” Ibrahim Kalin told Al Jazeera.

Kalin said that the Organization for Security and Co-operation in Europe (OSCE) Minsk Group has done very little to bring to end the frozen conflict in the southern Caucasus, adding that Azerbaijanis want a new road map and a plan.

“Yes to a cease-fire, but a cease-fire must be sustainable. And the only way to make it sustainable is also to talk about ending the Armenian occupation of Azeri lands,” he added.

Kalin underlined that Nagorno-Karabakh is Azerbaijani land, according to UN resolutions.

“Yes to a diplomatic solution but that needs to come up or combined with a timetable, with a road map that will bring an end to the occupation of Nagorno-Karabakh by Armenia,” he explained.

On a meeting in Geneva this week of the Minsk Group co-chairs – France, Russia, and the US –on the conflict, Kalin said:

“If they are calling only for a cease-fire, working just on a cease-fire, it will be nothing more than a repeat of what went on over the last 30 years. It is almost certain to fail if it doesn’t also involve a detailed plan to end the occupation,” he said, referring to Armenia’s illegal occupation of Upper Karabakh, or Nagorno-Karabakh, since 1991.

Underlining that Turkey wants the clashes to come to an end, Kalin stated that Ankara does not want civilians or others to be hurt.

In this conflict, many people have already lost their lives, and more than 1 million Azerbaijanis had to flee Nagorno-Karabakh in the 1990s when Armenian forces occupied this part of Azerbaijan, he said.

He stressed that Turkey wants an end to the human suffering, the fighting, the conflict in the Southern Caucasus, adding: “But if this Minsk Group is to be credible and if they are going to claim any political and moral authority at this point to bring an end to this conflict, they must also start serious work on ending the occupation.”

Kalin said that what happens in the Southern Caucasus is of direct concern to Turkey for two reasons.

“It affects our borders, it affects our region, our relationship with Azerbaijan, with Georgia and the larger Caucasus region, that’s number one,” he said.

“And we would like to see an end to this occupation of Azeri lands,” he said.

Asked about ethnic Armenians who have lived in Nagorno-Karabakh for decades, Kalin said:

“That’s a fact, they have been living there together with Azeris for many decades under the Soviet [era] republic rule, that is true.”

“And Azeris have always said that once Nagorno-Karabakh is liberated, those Armenians who live there will live just like any other citizens. They will be entitled to their rights, they will have freedom of religion, culture, identity, and so forth,” he stressed.

Kalin underlined: “Yes, it is occupation according to all the UN resolutions just like the Israeli occupation of Palestinian lands, there’s no legal or political debate about that, it’s a fact.”

No one has called for Armenian civilians to leave Nagorno-Karabakh, he stressed.

“As I said in the past before the Armenian occupation, the Azeris and Armenians were living together, but let’s not forget the fact that more than one million Azeris had to flee Nagorno-Karabakh after the Armenian occupation and as far as I remember, about 30-plus-thousand almost 40,000 people died over the last 30 years,” he said.

Kalin reiterated once again that in order for a peace or cease-fire in the region to be sustainable, it needs to be based on a plan to “end the occupation” and that this is the only way to solve this problem.

New clashes erupted between the two countries on Sept. 27, and since then Armenia has continued attacks on civilians and Azerbaijani forces.

The OSCE Minsk Group – co-chaired by France, Russia and the US – was formed in 1992 to find a peaceful solution to the conflict, but to no avail. A cease-fire was agreed to in 1994.

Relations between the two former Soviet republics have been tense since 1991, when the Armenia launched its military occupation of Upper Karabakh and seven adjacent regions.

Over 1 million Azerbaijanis were internally displaced, while 20,000 were martyred by Armenian forces and 50,000 wounded, according to Azerbaijan’s official figures.

At least 4,000 Azerbaijanis remain missing from the conflict, while more than 2,000 were captured and taken hostage by Armenian forces.