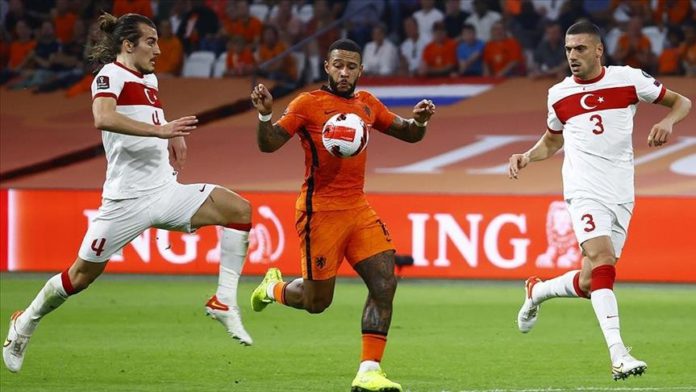 The Netherlands tore apart Turkey 6-1 in a 2022 FIFA World Cup qualifying match Tuesday, moving to the top of Group G.

The home team scored the opener very early in the match to shock Turkey at Johan Cruijff ArenA in Amsterdam.

Steven Berghuis found Davy Klaassen in the area, who sent the ball into the net after exchanging quick passes with Dutch star Memphis Depay.

The Netherlands doubled the gap in the 16th minute with Depay the scorer this time.

Klaassen was fouled in the area by Turkish defender Caglar Soyuncu and the home team were awarded a penalty.

Depay made it 3-0 in the 38th minute as the Barcelona forward converted an ice cold Panenka penalty, gently chipping the ball to send it to the center of the goal. Cakir plunged away from the center.

Near the end of the first half, Turkey were down to 10 men as Soyuncu fouled Depay to be sent off after his second yellow card.

The Netherlands led the first half 3-0 as Turkey faced a nightmarish 45 minutes.

Depay scored an easy diving header in the 54th minute to make the score 4-0 for the Netherlands and this was his hat-trick.

Berghuis assisted Depay after a long cross from the left flank.

Guus Til had a through ball to net his first Netherlands goal on a counter attack in the 80th minute.

The Netherlands did not stop as Dutch forward Donyell Malen scored the sixth goal in the 90th minute.

Turkish winger Cengiz Under put the ball into the Dutch net in injury time. The consolation goal made the result 6-1.

A defensive mistake between Dutch goalie Justin Bijlow and central defender Virgil van Dijk led to the goal for Turkey.

Van Dijk was hurt after a sliding tackle made by Turkish forward Halil Dervisoglu in the Dutch box. Then Bijlow failed to tackle Dervisoglu. Under was unmarked to score an open goal.

The goal was valid after a VAR (Video Assistant Referee) check for a possible foul on van Dijk.

It was a devastating loss but not the heaviest one for Turkey as England hammered Turkey 8-0 twice in 1984 and 1987.

The victorious Netherlands topped Group G with 13 points which they earned in six matches.

Second-place Norway have the same amount of points.

Turkey moved down to third spot in the group with 11 points.

Montenegro have eight and Latvia have five points in the group.

Gibraltar lost all six of their matches to occupy the bottom of Group G.

Only the group winners will automatically qualify for the 2022 World Cup. The runners-up in each group will face the playoff stage to fight for limited tickets for Qatar 2022.

In the next fixture, Turkey will face Norway in Istanbul on Oct. 8.

On the same day, leaders Netherlands will visit Latvia in Riga.