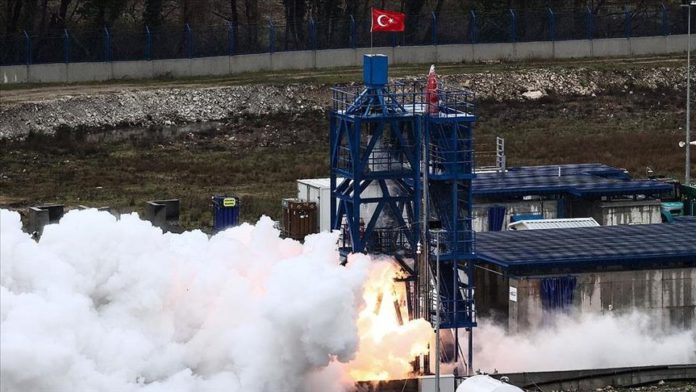 Turkey has successfully tested its first hybrid engine that will be used in its planned Moon Mission, the country’s technology and industry minister said on Sunday.

Mustafa Varank was briefed on the system in the Sile district of Istanbul.

The county is planning to send the unmanned spacecraft to make a hard landing on the Moon in 2023 as part of the country’s National Space Program.

Varank told Anadolu Agency that two successful firings were carried out during the tests — both the Probe Rocket System (SORS) ignition and the first ignition of the hybrid engine planned to be used in the lunar mission.

“We witnessed two firings today. One was the ignition of the engine of the 635-millimeter probe rocket, which will probably be launched next month. We also performed the ignition tests of a smaller engine that we aim to use in the lunar mission, in space,” Varank said.

Underlining that there was a targeted time of 50 seconds in the tests, Varank said: “This 50-second ignition was successfully completed. As of today, we can say that the first tests of the engine that can be used in the lunar mission have been successfully done.”

“We have carried out the first fire of the hybrid rocket motor that can be used on the lunar mission at the same time today,” he said, adding that a sample of the rocket engine would be launched from the northern Sinop province in May.

The hybrid engine is being developed by Delta V, an aviation and space technologies subsidiary to the Presidency of Defense Industries, he said, adding that Turkey aims to use all the capabilities of its companies.

“As you know, Turkey is a country that wants to show its capabilities, especially in the space field, to the world and to commercialize this ability to gain economic benefits,” he said, praising the efforts of Turkish young people in helping develop this technology.

Stressing that the liquid oxygen oxidative hybrid engines are a new technology of great importance for Turkey, he said: “In 2023, we think we can achieve the first step of our lunar mission goal.”

“In this sense, we’re happy and proud to have conducted the first ignition of the engine here,” he added.

“The tests of the lunar engine will continue to accelerate from now on,” Karabeyoglu said, adding that hundreds of tests would follow to ensure reliability.

He emphasized that Turkey’s SORS featured some of the most advanced hybrid rocket motor technology, which comprises oxidizing liquid and solid fuels, in the world.

Turkey to mark May 19 with virtual run fest