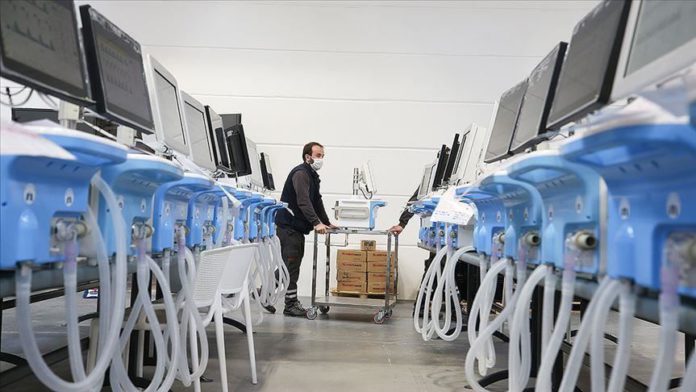 Seeking to stem the hundreds of millions of dollars it costs annually to buy medical devices from abroad, Turkey has stepped up its efforts to develop and produce these devices within the country instead.

Expenses for importing medical devices such as respirators or X-ray systems reached more than $8 billion in the last five years, while there has also been a gradual decline.

With severe shortness of breath a hallmark of the virus, the pandemic has raised the need for medical ventilators, resulting in a fresh impetus for defense, technology and automotive companies across the globe to research and manufacture the devices.

It developed a mobile X-ray system and focused on mass production, according to information provided by Turkey’s Defense Industries Presidency.

The system, which can be portable, is expected to be ready in one-and-a-half years, the presidency noted.

As part of its efforts, Aselsan produced several parts of the X-ray system domestically, such as the generator, collimator, detector, and cables.

The device was also designed by the defense giant.

Aselsan also focused on producing other medical equipment such as MR machines.

Turkey ranks first in the world with intensive care beds, 40 per 10,000 citizens, versus 28 per 10,000 on average among Organization for Economic Cooperation and Development (OECD) countries.

It had around 17,000 mechanical ventilators before the coronavirus pandemic, while several major countries, such as the UK, have less than 10,000.

And it has focused on building major hospitals throughout the country with a high patient capacity and modern medical devices.

While many developed countries provide very expensive healthcare, Turkey’s healthcare system is all but free.

Especially during the COVID-19 pandemic, which has infected more than 3.3 million people globally, all countries faced medical equipment and device shortages, which increased the importance of producing domestically.

Selcuk Bayraktar, the chief technology officer at Baykar, said last week that countries’ protectionist steps for domestic needs have damaged all of them except for Turkey.

Even the International Monetary Fund and the World Trade Organization urged governments to act carefully in restrictions on exporting mechanical ventilators.

Oil giants' loss exceed $20B in 1Q20 due to coronavirus

Turkey: Banking sector net profit at $8.1B in Jan-Nov