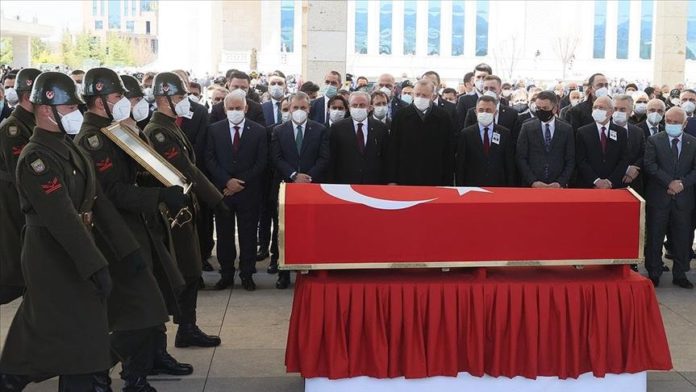 Turkey’s late former premier Yildirim Akbulut was honored on Thursday in a state funeral at the parliament.

“Our country and politics have lost an important value, a politician of his own style, and a symbol name,” Parliament Speaker Mustafa Sentop said during the funeral.

Sentop noted that Akbulut was known for his sincerity, honesty and humility. “He was a statesman among the people,” he said.

Akbulut’s family and relatives, as well as serving and former senior officials and political party heads and members attended the funeral.

Akbulut, who served as both prime minister and parliament speaker, passed away on Wednesday in Ankara, the Turkish capital. He was 86.

A parliamentarian for nearly two decades — from 1983 to 2002 — Akbulut had been receiving treatment at Ankara University Hospital.

He was born in the eastern province of Erzincan on Nov. 15, 1935, graduated from Istanbul University’s Law School and worked as a lawyer before entering politics.

One of the founders of the Anavatan (Motherland) Party, in 1983, Akbulut became a member of parliament representing Erzincan.

He served as Turkey’s interior minister from 1984 to 1987 under Prime Minister Turgut Ozal.

Re-elected to parliament in the 1987 general elections, Akbulut became parliament speaker and held the post until 1989.

That year, Akbulut formed a government as prime minister, and continued his political career as chairman of the Anavatan Party.

After leaving Anavatan to join the True Path Party (DYP), he ran for a parliamentary seat representing Istanbul. When his party failed to surpass the electoral threshold, he left parliament in 2002.

Akbulut was married to Samia Akbulut, a former member of the Constitutional Court, and they had three daughters.

UK on 'emergency footing' as doctor dies of COVID-19