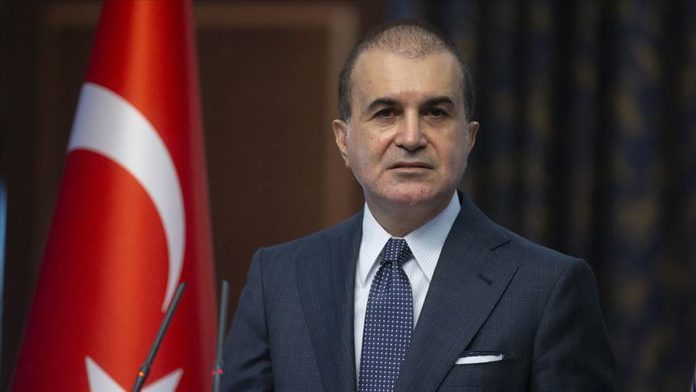 Turkey’s ruling party spokesman on Monday reiterated that the country stands by the Sarraj government and Libyan brothers.

Turkey continues to stand by the Sarraj government and Libyan brothers and all help, from military support to other areas, will be given upon President Recep Tayyip Erdogan’s order, said Omer Celik, spokesman for the Justice and Development (AK) Party, after a party board meeting.

The Libyan army has recently inflicted heavy blows to the renegade commander and liberated the capital Tripoli, and city of Tarhuna from his militants.

Referring to the recent regulation regarding the use of privately owned property within the British Sovereign Bases on Cyprus island, Celik stressed: “No one should even think about infringing on the rights of Turkish Cypriots in the British base areas.”

In these areas, not only Greek Cypriots, but also Turkish Cypriots have rights, he added.

In 2014, a regulation regarding the use of privately owned property within the British Sovereign Bases was signed between the Greek Cypriot administration and the UK, and it has entered into force.

“While clearly demonstrating our guarantee of peace in the Aegean and the Eastern Mediterranean, we see the constant sabotage of Greece or Greek Cypriots as childish diseases,” he added.

In 1974, following a coup aimed at the annexation of Cyprus by Greece, Ankara had to intervene as a guarantor power. In 1983, the Turkish Republic of Northern Cyprus was founded.