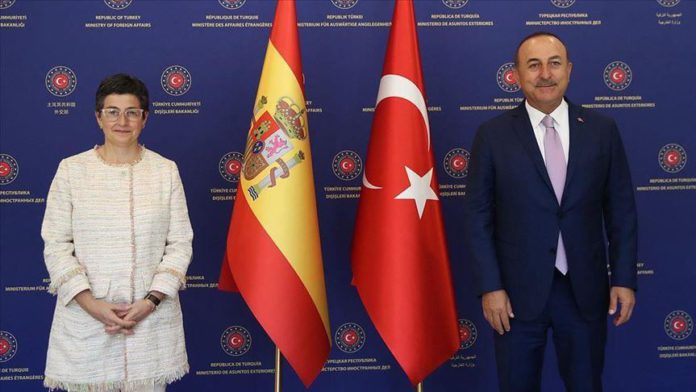 The Turkish and Spanish foreign ministers on Monday agreed to boost bilateral trade and investment.

In a joint news conference with Turkish Foreign Minister Mevlut Cavusoglu in the capital Ankara, Arancha Gonzalez Laya said that Turkey and Spain agreed to increase trade volume from the current €12 billion to €20 billion.

Recalling the virtual meeting of the Joint Economic and Trade Committee (JETCO) last week, she said that trade ministers of both countries discussed cooperation in key sectors, such as finance, technology, renewable energy, defense as well as transportation and tourism.

“Turkey is an important country for Spain in terms of foreign investment,” Laya said.

Spain reassured during the meetings its intention to increase the investments in Turkey, she added.

Laya said that trade and economic relations between the two countries are “very healthy.”

She added that a “business world forum” between both countries will be held in 2021 with the hope of enhancing investment and trade.

Laya made her first visit outside the EU to Turkey, which is a sign of the importance Spain gives to its friend and ally Turkey, she said.

She also thanked Turkey for its support in fighting the novel coronavirus.

“Their support for Spanish people’s return to their home country was really helpful,” she said.

The Spanish foreign minister said EU’s travel restriction to some countries due to the coronavirus is not a “political” decision but rather based on epidemiological criteria.

Two leaders also discussed the Libyan crisis during their bilateral meetings, she said, and added that Spain has requested a complete cease-fire in Libya.

“We want the parties to return to the Berlin process on Libya. We want them to reach a political agreement,” Laya said.