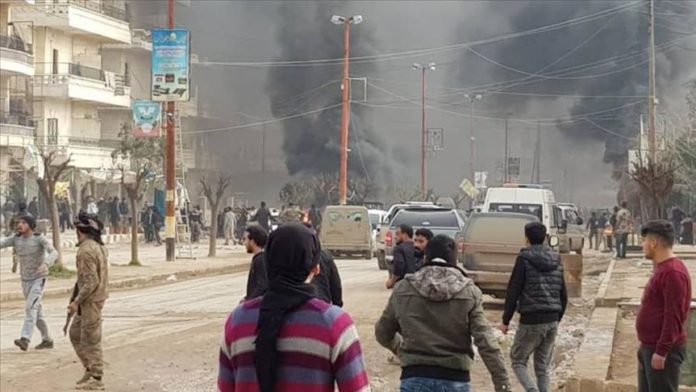 Turkey on Wednesday slammed a statement by the European External Action Service on the recent terrorist attack by the YPG/PKK in Afrin, northwestern Syria.

Fahrettin Altun, the country’s communications director, said on Twitter that the press release by the European Union’s diplomatic service shows the union still has not adopted the right stance in the fight against terrorism.

Altun said although the name of the terrorist organization was not mentioned in the press release, the perpetrator of the attack was certain.

“Despite all our warnings so far, those who supported and armed the YPG/PKK and tried to give it legitimacy and allowed the terrorist organization to operate in their countries are among those primarily responsible for the massacre in Afrin,” he said.

He said those who cannot openly condemn the terrorist attack harm the fight against terrorism.

“A ceasefire call is never made to terrorist organizations. Terrorism is condemned and terrorism is fought,” he said.

Altun stressed that Turkey has fought terrorism in all its forms and will continue to do so.

At least 40 civilians were killed, including 11 children, and nearly 50 others severely injured Tuesday when a bomb-rigged fuel tanker exploded in the center of Afrin close to Turkey’s border

Although the European External Action Service regarded the incident as a terrorist attack, it did not mention the name of the terrorist organization that carried it out and did not condemn the attack.

In its more than 30-year terror campaign against Turkey, the PKK — listed as a terrorist organization by Turkey, the US and European Union — has been responsible for the deaths of 40,000 people, including women, children and infants. The YPG is the PKK’s Syrian offshoot.

Australia says its citizens at risk of arrest in China