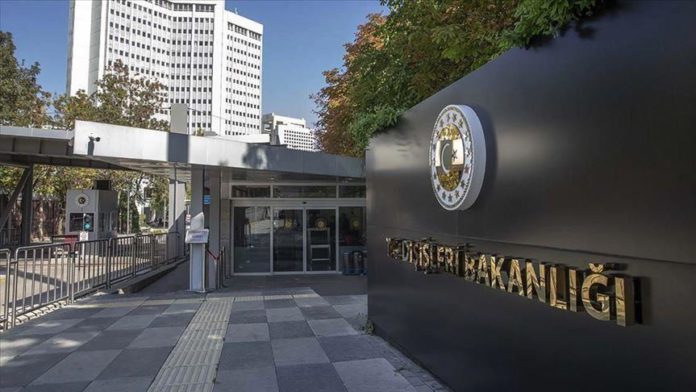 The US decision to partially lift an arms embargo from the Greek Cypriots, poisoning hopes for peace in the Eastern Mediterranean, is incompatible with the spirit of alliance, said Turkey late Tuesday.

The US decision announced Tuesday to lift the arms embargo from the Southern Greek Cypriot administration ignores the equality and balance between the two peoples on the island, said a Turkish Foreign Ministry statement.

The decision will definitely hurt efforts to resolve the Cyprus issue, it added.

The ministry stressed that at a time of ongoing efforts to reduce tension in the Eastern Mediterranean, the US making such a decision is incompatible with the spirit of alliance.

“We expect the US to reconsider its decision and support existing efforts to establish peace and stability in the region,” it said.

Turkey, as a guarantor country for Cyprus, will resolutely take the necessary steps to guarantee the security of the Turkish Cypriots in accordance with its legal and historical responsibility, the ministry highlighted.

Following the forcible 1963 division of the island of Cyprus by the Greek Cypriots, the Turkish Cypriots suffered under a campaign of ethnic violence.

In 1974, following a coup aiming at Cyprus’ annexation to Greece, Ankara had to intervene as a guarantor power. In 1983, the Turkish Republic of Northern Cyprus (TRNC) was founded.

For many decades, there were talks to resolve the dispute, all which ended with failure. The latest, held with the participation of the guarantor countries – Turkey, Greece, and the UK – ended in 2017 in Switzerland.