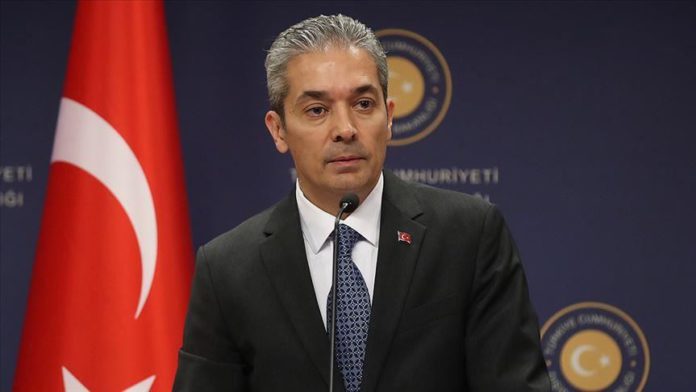 Turkey on Friday slammed a report by the UN Human Rights Council accusing Ankara of recruiting men from its local allies in Syria to fight for Azerbaijan in Upper-Karabakh, where weeks of armed clashes with Armenia recently ended with a peace deal.

He said the only reason for circulating this “fake news” is to ignore the unlawful occupation of Armenia and build its image as a victim.

“It has been proven that Armenia took videos of the members of the Syrian National Army and published it on the internet as supposed evidence. These fake videos and the words of these people, who spoke in exchange for money have no credibility or validity,” Aksoy said.

He also questioned the credibility of the UN Special Procedures Mechanism for releasing a press statement on the basis of fake images and news, without waiting for a response from Turkey.

“What is expected from this mechanism is that it conducts its work transparently and taking into account the views of all relevant parties, rather than making biased and misleading statements,” he added.

“It is well known that Armenia deployed PKK/YPG terrorists from Syria in Upper Karabakh. In fact, many PKK members, whose names are known to us, were neutralized by the Azerbaijani army in the conflicts,” Aksoy said.

Aksoy condemned the lack of mention of Armenia when the statement stood on the deliberate attacks on civilians.

“As Prime Minister Pashinyan’s military adviser explained, Armenia has deliberately attacked civilian settlements in Azerbaijan with banned cluster bombs and committed war crimes in order to create chaos among the people,” he said.

Aksoy stressed that Armenia’s violation of international law has also been recorded by Human Rights Watch and Amnesty International.

The UN statement had previously said Azerbaijan and Turkey had relied on Syrian fighters at the Nagorno-Karabakh conflict zone and that the fighters had appeared to be motivated by private gain.

It stated that Turkey engaged in large-scale recruitment and transfer of Syrian men to Azerbaijan through armed factions, some of which were affiliated with the Syrian National Army.

On Monday, a Russia-brokered peace deal ended fresh clashes that erupted on Sept. 27.

The Turkish leadership welcomed the truce, terming it a “great victory” for Azerbaijan.