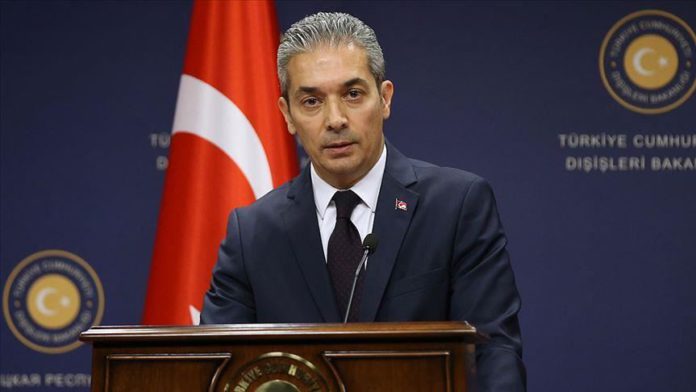 Turkey criticized France on Sunday over a textbook to be used in French high schools which includes propaganda from the YPG/PKK terrorist organization.

“The textbook, said to be prepared by a publishing house to be taught in high schools in France, includes information regarding the Kurds in line with the separatist ideology of the YPG/PKK terrorist organization,” Foreign Ministry Spokesman Hami Aksoy said in a statement.

“The views and warnings in Turkey’s previous statements — regarding France’s support to the terrorist organization, which is threatening Turkey’s national security, and insisting on a mistake of equating Syrian Kurds with the PKK/YPG — are still valid,” he said.

Aksoy said France’s attempts to build its foreign policy preferences on almost all issues based on its anti-Turkey rhetoric and while attempting to distort historical truths and the law is worrying.

“It is obvious that this terrorist propaganda, which is a result of the official policy of France, was initiated with the courage taken from those who host the so-called representatives of the terrorist organization at the Presidential Palace,” he underlined.

The underlying reason for these groundless allegations is deep disappointment stemming from the blow Turkey dealt with its Operation Peace Spring to France’s plans to establish a terrorist state.

“The French authorities described Turkey’s counter-terrorism operations — carried out to ensure security and stability in the region within the framework of respect for Syria’s territorial integrity — as an invasion attempt,” he said.

The distorted presentation of ideological dogmas and political interests in textbooks poses a serious danger to future generations, and Turkey will continue to be a close follower of this issue until France corrects its mistake in its education sector, he added.