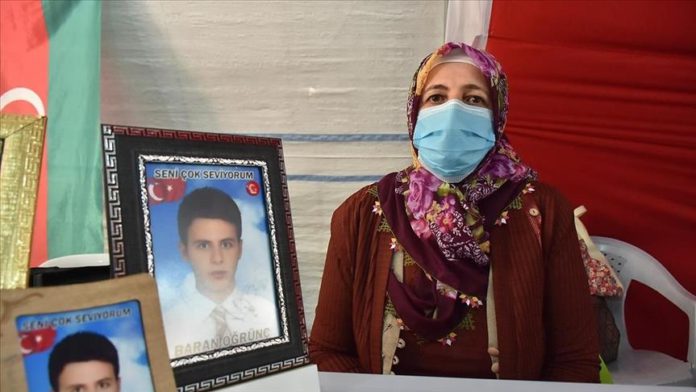 A sit-in protest against the YPG/PKK terror group in southeastern Turkey’s Diyarbakir province continued for a 484th day, with parents demanding the return of their kidnapped children.

The protest outside the office of the Peoples’ Democratic Party (HDP) — which the government accuses of having links to the YPG/PKK — began on Sept. 3, 2019 when three mothers said their children had been forcibly recruited by YPG/PKK terrorists. It has been growing every day.

“The HDP and PKK are the same. Without the HDP, there would be no PKK. They are child snatchers,” said Solmaz Ogrunc, whose son Baran was abducted by the terror group five years ago in Van province.

“I want my son. I have been separated from my son for five years. I will not go without my son. They are taking away the children of the poor people. How dare they!” she said.

She also urged her son to surrender to Turkey’s security forces.

Nadire Cakan, whose teenage son Muhammed was abducted, said in Kurdish that she wants her son to come back.

“Don’t leave your mother alone. Come, surrender to the state. Our state is powerful,” she said.

'Turkey expects US to review its sanction decision'