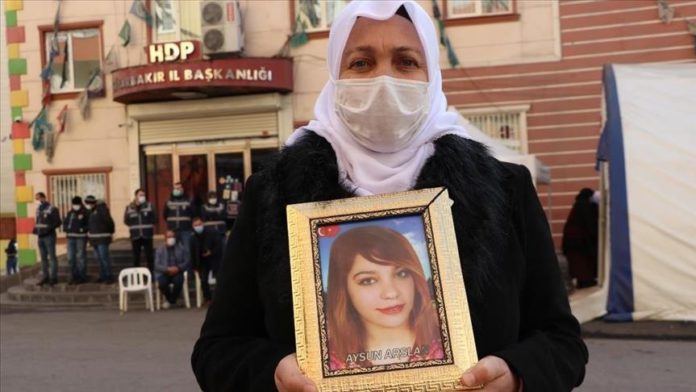 One of the mothers staging a protest against the PKK terror group and its Syrian offshoot YPG in southeastern Turkey called on her daughter to lay down her weapons and surrender to Turkish security forces.

Aydan Arslan, 41, is among the families staging a sit-in in Diyarbakir province for over a year to bring back their children.

The protest began on Sept. 3, 2019, when three mothers said their children had been forcibly recruited by PKK terrorists. The protest is staged outside the provincial offices of the Peoples’ Democratic Party (HDP) and has been growing since.

“If she sees and hears me, [or] sees children of other [protesting] families, let them take strength from each other and run away [from the ranks of YPG/PKK]. There is nothing to be afraid of here,” said Arslan.

“They are intimidated, but there is no such thing. Do not be afraid… If she sees one of our soldiers anywhere, she should surrender to our security forces,” she added.

Her then 15-year-old daughter, Aysun, was influenced by her circle of friends into joining the terror group, according to the mother, who went on to say that her daughter was taken to Syria to fight under the banner of the YPG.

Following her graduation from middle school, Aysun earned the right to receive her high-school education in the Lice district of Diyarbakir; however, her family, fearing their daughter would be vulnerable to the influence of terror affiliates there, decided not to send her to school for a while.

Emphasizing that the families at the protest understood each other as they all tasted the bitter feeling of losing their children, she went on to note that they got strength from each other and one’s determination encouraged the other to continue the protest no matter how long it took.

“We support each other and understand each other’s suffering. We all share the grief of losing a child, we all suffer from the same pain,” she said.

So far, at least 24 families have reunited with their children who fled the terror group and surrendered to Turkish security sources; offenders in Turkey linked to terrorist groups who surrender are eligible for possible sentence reductions under a repentance law.

In its more than 35-year terror campaign against Turkey, the PKK — listed as a terrorist organization by Turkey, the US, and EU — has been responsible for the deaths of 40,000 people including women, children, and infants. YPG is its Syrian branch.