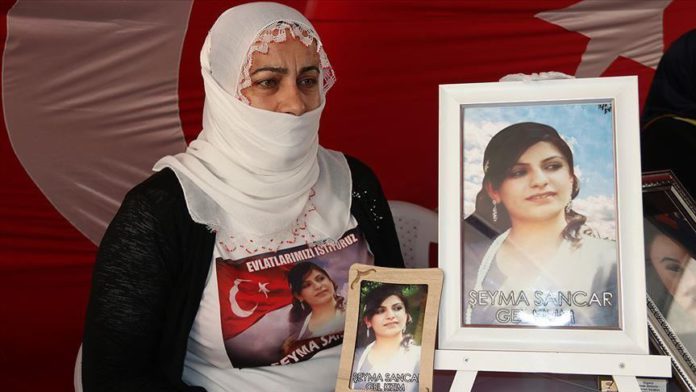 As a group of weeping families continue their sit-in protest in eastern Turkey’s Diyarbakir province, they call on their children abducted by the PKK terror group to surrender to security forces.

The protest began on Sept. 3 last year in the city of Diyarbakir, when Fevziye Cetinkaya, Remziye Akkoyun, and Aysegul Bicer said their children had been forcibly recruited by PKK terrorists. The sit-in outside the office of the Peoples’ Democratic Party (HDP) — which the government accuses of having links to YPG/PKK — has been growing day by day with the participation of many others since then.

One of the mothers, Nazli Sancar, said her daughter Seyma was abducted by the terror group in 2011 at the age of only 13, and the tearful mother has not heard of her child since then.

Sancar said Eid al-Adha, the Muslim festival of sacrifice, was approaching and she did not want to spend another Eid without her beloved child, saying she was weary of waiting for her child.

“Our hearts are bleeding, we just want our children back. We did not give birth, or raise our children for the sake of HDP,” said the mother, urging her child to surrender to security authorities.

Abdullah Demir, one of the protesting fathers, said the absence of his child was the greatest pain he had ever suffered from.

The father accused the terror group of forcibly recruiting children, and said it did not have any humanitarian values.