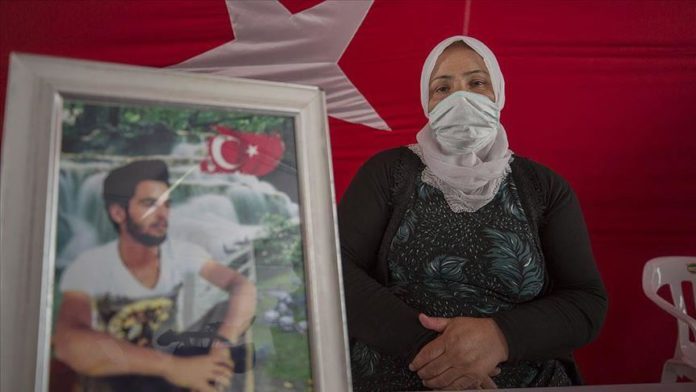 A sit-in by families in southeastern Turkey whose children were kidnapped by terrorists entered its 353rd day on Thursday.

The protest began last September in the city of Diyarbakir, when three mothers said their children had been forcibly recruited by YPG/PKK terrorists. The sit-in outside the office of the Peoples’ Democratic Party (HDP) – which the government accuses of having links to the terrorist YPG/PKK – has been growing every day.

Protesters have vowed to continue the sit-in until every family is reunited with their children.

Solmaz Ovunc, one of the protesting mothers, said her son Baran was kidnapped by the terror group five years ago when he was only 15, and the boy’s absence is the greatest pain she has ever suffered.

“The terrorist group must take their dirty hands off our children,” she said.

Ovunc said her son was kidnapped from their home in Van, eastern Turkey and she will never return home without him.

Another mother, Necibe Ciftci, said her son Rosat was abducted by the terror group six years ago.

She said three years ago another of her sons tried to find his brother but was himself killed by the terror group.

“They took both of my children away from me. My son is being held captive in caves. The terrorists make my son lie down on rocks, hungry and thirsty,” she said.

She added that due to the terror group, their children are holding guns instead of pens.

“I will give a pen to my son instead of a gun,” she said.