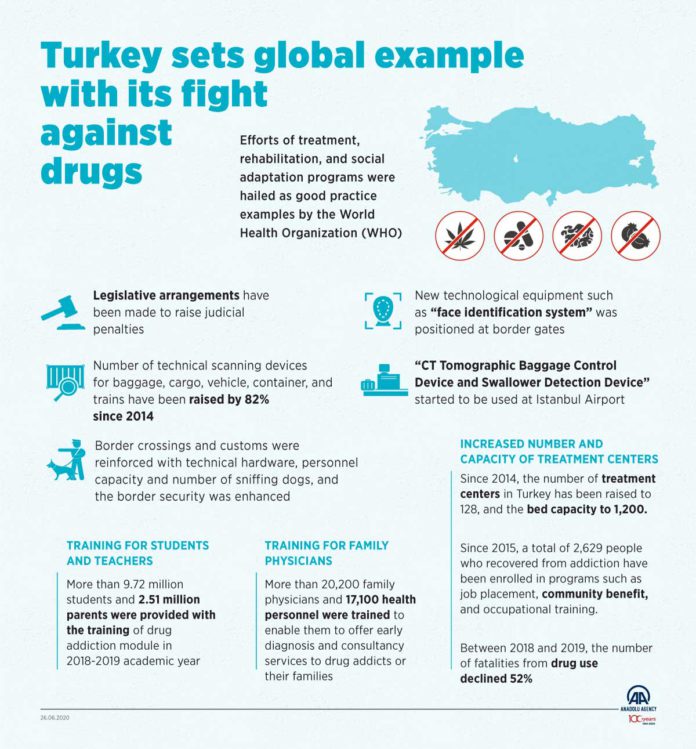 With full cross-departmental coordination in fighting drug abuse, Turkey has managed to bring down high rates of narcotics-induced deaths, setting an example for the world on the June 26 International Day Against Drug Abuse and Illicit Trafficking.

Analyzing data compiled by the country’s Health Ministry, Anadolu Agency found that Turkey uses a variety of methods and programs to combat drug use, including treatment, rehabilitation and social adaptation of former abusers.

Political, bureaucratic, civic and scientific actors complement and reinforce each other in the country’s nationwide efforts that have been organized on a multi-stakeholder structure that has been praised by the World Health Organization (WHO).

WHO has since prepared an English-language publication on Turkey’s program so other countries could benefit from its experiences.

Turkey’s anti-drug policy is run by its High Board of Combatting Addiction, in which the ministries of justice, family, social services, treasury, education, transportation, trade and health, and presidential representatives work in harmony.

Though raising criminal penalties on drug use and trafficking, it has also introduced measures to promote rehabilitation. For instance, convicted drug abusers are allowed to be released on probation if they agree to receive treatment for their addiction, instead of being handed jail terms off the bat.

To help encourage drug abusers to receive professional medical attention and ensure patient-doctor trust, the health personnel are not required to report drug use if addicts apply to health institutions.

In an effort to foil drug traffickers who often attempt to transfer drugs through Turkey due to its geographical location between Asia and Europe, Turkish authorities have boosted manpower, narcotic dogs and border security over its land, air and sea borders.

Devices used to scan baggage, cargo, shipping containers and trains have been increased by 82% since 2014 and new technologies including face identification systems have been installed at border crossings. Also, a tomographic detection device is now available in Istanbul Airport — a measure taken to prevent the entry of traffickers who swallow drugs to avoid being caught.

In addition to a police hotline, mobile applications and WhatsApp notice lines have been opened so people can quickly and easily reach security officials. Field narcotics operatives also serve on the streets to prevent drug trafficking.

Not being limited to law enforcement, other precautions involve the Ministry of National Education, which has introduced new lessons in which students and parents are informed on drug abuse. About 32,000 counselors were trained to effectively combat addiction and build awareness.

In the 2018-2019 school year, more than 9.7 million students and 2.5 million parents were provided with drug addiction lessons so they could protect themselves and their loved ones at risk of drug abuse.

More than 960,000 civil servants were provided anti-drug education in line with the program adopted by the High Board of Combatting Addiction.

More than 20,000 doctors and 17,000 health personnel were educated on drug addiction and play advisory roles for those seeking help.

On top of this, health life centers in the country include psychologists, social researchers and educators whom many looking for assistance can consult for themselves or family members.

People can also call a 24-hour hotline to get help for family members and addicts. It has so far received more than a quarter-million calls since it entering service.

Callers do not need to provide any personal information and can simply ask for motivational conversations. Those with high addiction tendencies are referred to healthcare centers and psychiatric clinics.

If approved by health professionals, those seeking help on the phone are called up to six times a year to maintain a long-term interaction between addicts and health personnel. In 2019, almost 31,000 people were called.

Of those who called the hotline, 62% requested treatment and 58% were males. According to the surveys, 97% of the callers were satisfied with the hotline’s services. Treatment services are available in all 81 provinces in Turkey.

To ensure post-treatment rehabilitation, new vocational education programs were also introduced. A total of 2,629 people were served in new programs since 2015.

Further spiritual assistance for those who overcame their addiction is also provided by the country’s religious directorate.

Thanks to these efforts, the rate of drug-related deaths has significantly declined over the past few years, falling by 52% from 2018 to 2019.