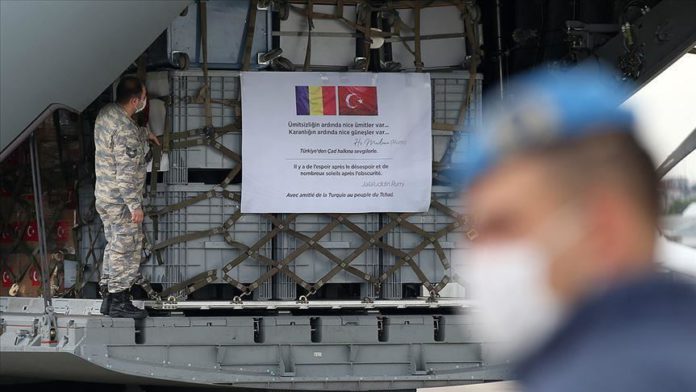 A Turkish plane carrying medical supplies departed for the second time from the capital Ankara for Chad on Thursday in the wake of the coronavirus pandemic.

“A Turkish Armed Forces aircraft, carrying the medical supplies, prepared by the Health Ministry at the direction of President Recep Tayyip Erdogan, for use against the COVID-19 outbreak, took off from Ankara Etimesgut Airbase for Chad,” the National Defense Ministry said on Twitter.

Besides the medical supplies, the aircraft also carried an ambulance to be donated to Chad.

The boxes containing the aid carried a message for people of the Central African country: “After hopelessness, there is so much hope, and after darkness, there is the much brighter sun,” it said, quoting the words of 13th century Sufi poet Jalaluddin Rumi.

The first set of supplies was sent on May 26 along with an ambulance.

Turkey and Chad signed two agreements on donation in the field of health on May 6 and May 21.

The medical supplies by Turkey are “granted to the government of the Republic of Chad as a gesture of friendship and goodwill.”

Turkey has helped at least 125 countries with humanitarian aid, including the US, UK, Italy and Spain, making it the world’s third-largest provider during the pandemic.

Worldwide, the virus has killed more than 449,000 people, with total infections over 8.35 million, and 3.89 million recoveries, according to figures compiled by US-based Johns Hopkins University.