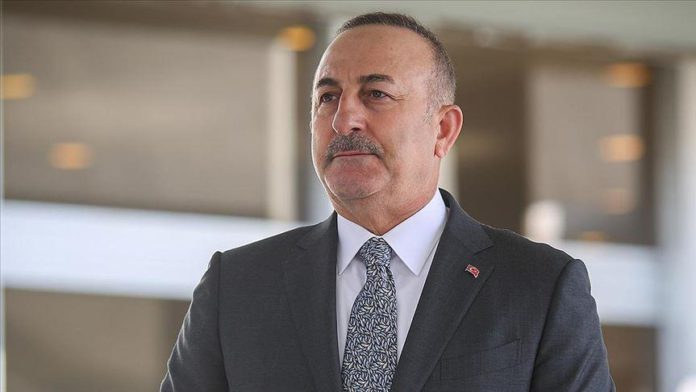 Turkey’s top diplomat on Wednesday reiterated the country’s position that it saw its future with the EU, but that before its accession could take place, existing issues would need to be overcome

Speaking at the fourth TRT World Forum in a panel titled New Realities and Interstate Relations After COVID-19, Foreign Minister Mevlut Cavusoglu delivered remarks on diplomatic interactions under the shadow of the novel coronavirus outbreak, as well as multilateralism and Turkey’s foreign policy in general.

“Turkey is a strong NATO ally and sees its future in the European Union,” Cavusoglu said. “Once we overcome the current confusion existing mostly on the European side, I believe that the historic step of Turkey’s accession to the EU can be taken.”

He suggested that the resolution of ongoing disputes between Ankara and Brussels would have a “transformative effect” on Turkey’s wider neighborhood as well.

Commenting on developments in the Eastern Mediterranean, where tension has been high since the discovery of hydrocarbon reserves, Cavusoglu said his country’s primary concern was to protect its rights, along with those of the Turkish Republic of Northern Cyprus (TRNC).

According to the minister, Greece and Greek Cypriots are trying to impose their “unilateral and maximalist” agenda on Turkey, abusing EU solidarity to promote their “nationalist agenda” of these members.

Among the topics Cavusoglu commented on was the boarding of a Turkish-flagged commercial vessel without Turkey’s consent on Nov. 22.

In a clear violation of international law, Operation IRINI, the EU initiative to implement a UN arms embargo on Libya, was “used as a tool against Turkey,” he said, noting that the German frigate that forcibly halted the Turkey-flagged cargo vessel found no contraband onboard, whereas crew members had been mistreated and harassed.

“We strongly protest this illegal act. UN Security Council resolutions on the Libyan arms embargo do not overrule the freedom of navigation. We reserve our right to resort to every available legal and legitimate tool to respond,” he said on the incident, which occurred off the Peloponnese islands.

The minister went on to say that Turkey’s training and advisory support for the UN-recognized Libyan administration not only prevented a civil war but also opened the way for the UN-led political process.

Despite the fact that the operation raised eyebrows in the Turkish administration, the country is still ready for dialogue and cooperation in the Eastern Mediterranean, according to Cavusoglu, who called for a regional conference where all littoral states, including Turkish Cypriots, would be present.

In recent months Turkey has sent several drillships to explore for energy resources in the Eastern Mediterranean, asserting its own rights in the region, as well as those of the TRNC.

Further inland, Turkey’s operations in war-weary Syria paved the way for the return of over 411,000 Syrians to their homeland, Cavusoglu said.

He underlined that the presence of Turkish troops in the northwestern Idlib city prevented another humanitarian disaster and migration wave, noting that Turkey’s operations cleared over 8,000 square kilometers (3,089 square miles) of terror groups, namely YPG/PKK and Daesh, also known as ISIS.

As for the diplomatic front to end the fighting, he said: “Our efforts as Astana Guarantors together with the UN paved the way for the work of the Constitutional Committee.”

Syria has been in turmoil since early 2011 when a bloody civil war erupted after the Bashar al-Assad regime cracked down on pro-democracy protests with unexpected ferocity.

Becoming the world’s top refugee-hosting country with over 3.6 million Syrians for its part, Turkey has been one of the most-affected countries by the Syrian civil war, which has led to hundreds of thousands of deaths and destruction in scores of settlement areas that led to the displacement of some 6.2 million people, according to the UN.

Referring to the conflict in the Nagorno-Karabakh region, also known as Upper Karabakh, between Azerbaijan and Armenia, the Turkish foreign minister said the “illegal invasion of one-fifth of Azerbaijani territory since the early 1990s was deemed a frozen conflict.”

However, according to Cavusoglu, there is no such thing as “frozen conflict” as it was not the conflict but the solution that was frozen.

“When Armenia continued its aggression through repeated attacks, the conflict turned violent again,” he said.

Stressing that Turkey supported a negotiated solution based on international law and the UN Security Council (UNSC) resolutions, he went on to say that the Ankara administration welcomed the joint statement signed between Azerbaijan, Armenia and Russia, adding that Turkey would also undertake a role to preserve peace and monitor cease-fire upon Baku’s request.

Nagorno-Karabakh is a territory internationally recognized as part of Azerbaijan. But, it has been under Armenian occupation since the early 1990s.

New clashes in the territory erupted on Sept. 27, and ended with a Russian-brokered truce, which was seen as a victory for Azerbaijan.

Cavusoglu argued that the eruption of the novel coronavirus outbreak exacerbated rising trends of intolerance, racism and Islamophobia, regretting that “Europe was the focal point of such negative trends”, particularly the west of the continent.

The minister added that Turkey was concerned about the growing populist, racist, anti-immigrant discourse in Europe, adding that hate speech and offensive publications were on the rise against Muslims whose security and well-being are under threat.

“Populist and racist discourse will only serve to strengthen radicals and terrorists,” he said.

Also commenting on the “ill-treatment” of asylum-seekers by Greece and the European Border and Coast Guard Agency (Frontex), the foreign minister said push-back policies were against international law as Europe remains silent on the matter.