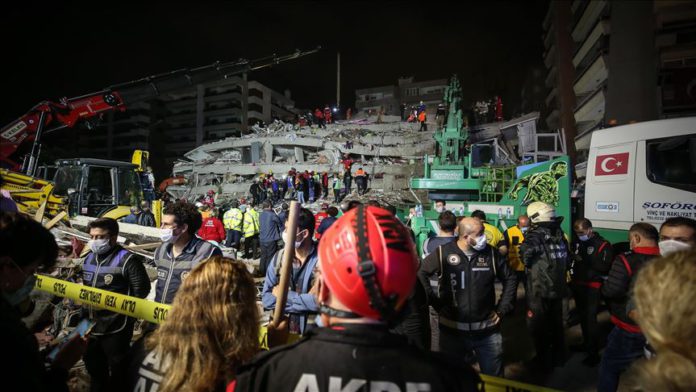 Twenty people were killed and at least 786 injured when a magnitude-6.6 earthquake jolted Izmir on the Turkish Aegean on Friday, the Disaster Management Agency Authority (AFAD) said early Saturday.

At least 725 were injured in Izmir, and in neighboring provinces, five in Manisa, two in Balikesir and 54 in Aydin.

At least 244 aftershocks, with 24 more powerful than magnitude-4.0 were recorded, according to AFAD.

Search and rescue operations have been completed in four buildings in Izmir — Turkey’s third-largest city — while work continues in 13 others.

It said one of the fatalities was a result of drowning.

Izmir Governor Yavuz Selim Kosger said the quake triggered a partial tsunami in the coastal district of Seferihisar, which left at least one person injured.

More than 450 vehicles and over 3,200 rescue workers, along with the 20 sniffer dogs, were dispatched to the scene.

The agency said another earthquake, magnitude-5.1, hit the Aegean Sea, 20 kilometers (12.4 miles) off the Kusadasi district of Turkey’s Aydin province.

The National Defense Ministry established a crisis desk and two military helicopters are taking part in search and rescue efforts.

Istanbul Governor Ali Yerlikaya said the quake was also felt in his city, 328 kilometers (204 miles) north of Izmir, but the metropolis did not suffer any damage.

“We took action to start the necessary work in the region with all our relevant institutions and ministers,” he added.

Turkey’s Communications Director Fahrettin Altun conveyed condolences to the families and friends of those killed.

“We pray that there is no further loss of life in Turkey or Greece and we send our best wishes to all those affected on both sides of the earthquake,” he said on Twitter.

Altun added that Turkey is ready to help Greece if needed.

The National Observatory of Athens’ Institute of Geodynamics initially put the magnitude of the quake at 6.6 but later revised it to 6.7.

It struck northwest of the Greek island of Samos in the Aegean Sea, said the observatory.