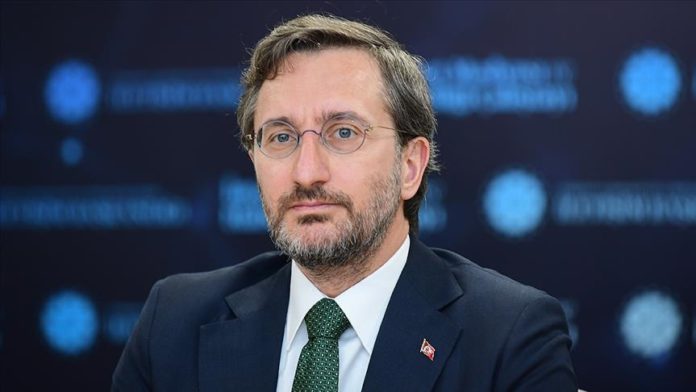 Greece should give up its maximalist claims and conceive ways to benefit from regional resources together with Turkey, said Turkey’s communications director.

Turkey wants good relations with all neighbors, including Greece, and expects the same attitude from them, Fahrettin Altun told Kathimerini, a pro-government daily in Greece.

Turkey is not liable for the tension between Turkey and Greece, Altun said in an interview published Sunday.

Detailing his argument, Altun underlined that some Greek and Greek Cypriot politicians put forward maximalist demands which overlook the rights of Turkey and Turkish Cypriots and are not in line with international law.

They presented these maximalist demands to Greek people as if they are legitimate rights, he said.

What Turkey does, in response to these maximalist demands, is only defending its own rights in the Aegean and the Eastern Mediterranean, the Turkish official maintained, pointing out that the Greek public is ill- and misinformed about Turkey.

“Turkey expects Greece to give up its maximalist claims and conceive ways to exploit regional resources together with Turkey,” Altun said.

Altun reiterated that Turkey favors a peaceful solution through negotiation for every regional problem that concerns itself, and its stance is the same for the Cyprus issue.

Turkish Cypriots voted in favor of the Annan Plan in 2004, Altun recalled and stressed that the possibility of co-existence of Turkish and Greek Cypriots in a single state disappeared for good when the EU approved the Greek side’s membership to the bloc.

“Despite this, good faith was showed (by Turkish Cypriots). However, this has limits. Now, everybody see that it is not possible to live (for Turkish and Greek Cypriots) under the same roof,” he added.

The most realistic resolution, therefore, is a two-state solution with which Turkish and Greek Cypriots would have equal rights, Altun remarked.

On Hagia Sophia Mosque, which reopened for Muslim worship last year after serving as a museum for 86 years, Altun said there are some misunderstandings regarding it.

The fact that its status as a mosque was restored by a court decision, not a government decision, does not change its character as the common heritage of humanity, he stressed.

It is an internal matter of Turkey at the end of the day, Altun also said.

In July 2020, a top Turkish court annulled a 1934 Cabinet decree, which had turned Istanbul’s Hagia Sophia into a museum. This verdict by the country’s Council of State paved the way for its use again as a mosque after 86 years.

Drawing to the 2016 defeated coup in Turkey, Altun asked how would you feel if Greek planes bombed the capital Athens, tanks crushed cars on streets, and civilians were executed.

Instead of returning putschists having fled to Greece after the coup bid, Greece gave them the status of a political refugee, the Turkish official said.

“We would have expected Greece, which itself suffered from coups in the past, to show a different attitude,” he said, expressing Turkey’s frustration over Greece’s policy regarding the post-July 15 era.

The Fetullah Terrorist Organization (FETO) and its US-based leader Fetullah Gulen orchestrated the defeated coup on July 15, 2016, in which 251 people were killed and 2,734 wounded.

On the Turkey-US relations, Altun said there are some issues, including terrorist groups FETO and YPG/PKK, on which the two countries differ, but emphasized the importance of focusing on areas of cooperation.

The steps we will take together in Afghanistan is a perfect example of this, he stated.

Also addressing the refugee crisis, Altun stressed that the irregular migration grew into a crisis because of the EU’s lack of strategy and vision.

Turkey did more than it was obliged to regarding refugees, Altun said, adding that it prevented a mass flow of irregular migrants to Europe by creating safe areas in northern Syria as a result of its successful operations against Daesh/ISIS terror groups.

Structural problems cannot be fixed through palliative solutions, he underlined and said that Turkey should be provided with more support by the EU.

*Writing and contribution by Ahmet Gencturk in Ankara