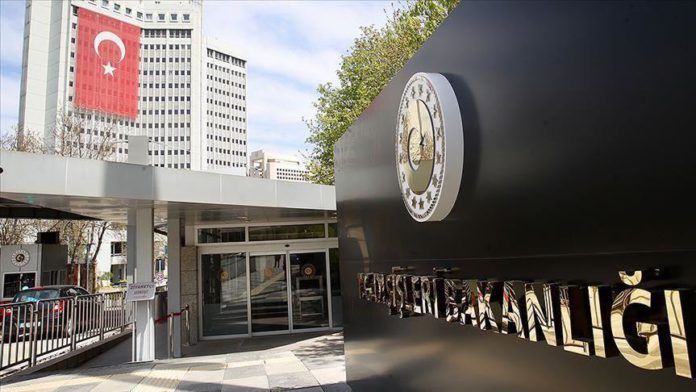 Turkey on Thursday condemned French President Emmanuel Macron over his “arrogant” remarks made with “colonial reflexes.”

In a statement, the Turkish Foreign Ministry said Macron endangers EU interests with his “individual and nationalistic stance.”

Macron’s statement seeks “to give lessons by speaking pedantically with his old colonial reflexes,” the statement added.

Earlier today, ahead of a summit of EU Mediterranean states which excluded Turkey, Macron reportedly said: “We must be tough with the Turkish government and not with the Turkish people, who deserve more than the Erdogan government.”

The ministry added that President Recep Tayyip Erdogan is one of the leaders in Europe elected with the largest winning vote.

“Our president has always drawn his power from the Turkish people. The Turkish people and the government have always had one heart in the face of such delusions and will continue to do so,” the statement added.

Turkey calls on France to “take a stand in favor of reconciliation and dialogue,” instead of “blindly acting as advocates of Greece and the Greek Cypriots, who take unilateral and provocative steps and take the EU hostage for their narrow-minded interests,” the statement added.

“This is a requirement of our Europeanness and our NATO Alliance,” the ministry said, referring to Turkey and France both being members of NATO.