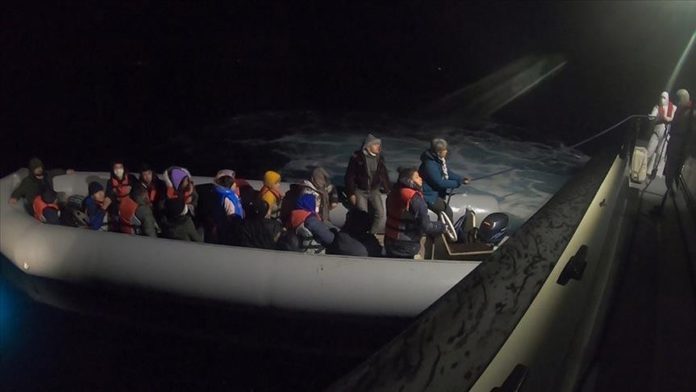 In the last month, the Turkish Coast Guard has rescued a total of 468 asylum seekers who were illegally pushed back by the Greek side into Turkish territorial waters in the Aegean Sea, according to official figures.

According to the Turkish Coast Guard Command, between Jan. 1 and this Wednesday, March 24, at least four asylum seekers also lost their lives during crossings in the Aegean.

Crossing into Europe to start new lives for irregular migrants has become even more difficult due to the actions of Greece in recent months.

Greece has illegally pushed asylum seekers who either arrived onshore or settled in camps back into Turkish territorial waters since February.

Extending its helping hand to asylum seekers, the Turkish Coast Guard provides them with food, clothing, and blankets. In addition, those who need medical assistance are taken to hospitals.

So far this year, 808 asylum seekers were caught on land by the gendarmerie and police units before reaching the sea, while 11 suspects who allegedly organized crossings were detained.

A group of Afghan asylum seekers was also forcibly pushed back to Turkey by Greece under the pretext that they would be tested for the coronavirus.

Eight of the 13 Afghans who are now living with their relatives in Turkey’s central province of Karaman told Anadolu Agency that they were picked up by Greek officials from a refugee camp and put on a rubber boat to Turkish shores.

Rauf, one of the asylum seekers, said that he gave their life’s savings to a human smuggler in Turkey’s western province of Canakkale for a safe passage to the Greek island of Lesbos in the hopes of a better life.

But he faced an unexpected situation when the Greek police took him from the camp on the island and put him on a boat, on the pretext that he had to get tested for the coronavirus.

He said the group of asylum seekers was beaten up when they refused to get on the boat.

“They took everything we had, including our IDs and money, jewelry.”

They were dragged into the sea and left to die, he said, adding that his eight-month pregnant wife was also pushed into the water and beaten.

Turn for the worse

Another asylum seeker, Destker Doliti, 18, said he thought his life would take a turn for the better when he landed on Lesbos.

But the Greek police took their documents, belongings, and money by force, he added.

The Turkish Coast Guard on Sunday also found an asylum seeker who had gone missing three days earlier when the Greek Coast Guard dumped him along with several others in the Aegean Sea.

On Friday, at least three people were found dead, three others were rescued, and one was missing after the Greek Coast Guard robbed a group of asylum seekers and dumped them in the Aegean Sea.

Greek forces assaulted 29 asylum seekers, took their valuables, and left them stranded on an island in the middle of the Meric (Maritsa) River between the two countries on Feb. 27.

On March 17, the Turkish Coast Guard dispatched teams to rescue asylum seekers in eight lifeboats stranded off Seferihisar in the Aegean Izmir province.

In a video of the rescue, asylum seekers are seen applauding the teams’ arrival.