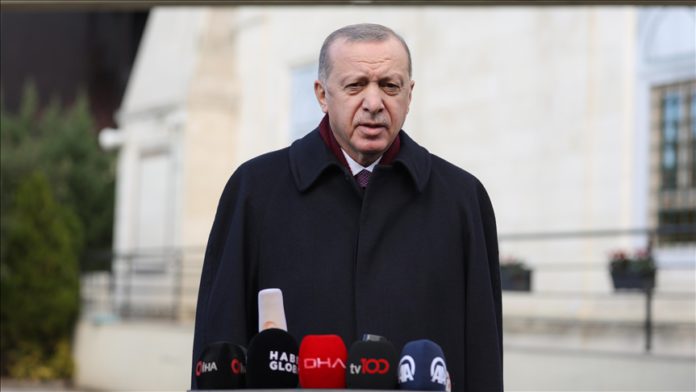 Turkey’s president on Friday criticized attempts to impose sanctions on his country warning that such measures would only harm all sides.

Speaking at a meeting of the ruling Justice and Development (AK) Party via video conference in Istanbul, Recep Tayyip Erdogan said: ‘Turkey’s doors are open to all investors and will continue to be open.”

“We have deep-rooted political and economic relations with both the United States and the European Union that neither can ever ignore or would want to lose,” Erdogan said.

He said recent attempts to impose sanctions on Turkey would “not benefit or profit anyone.”

“As Turkey, we haven’t taken any steps that would harm these relation [with US, EU],” Erdogan added.

The Turkish president also hit back at domestic criticism on Qatari investments and said these were a sign of “fascism.”

Erdogan also asserted that anyone who lashed out at the country’s UAVs, tanks, artillery, missiles, engines are attacking either knowingly or unknowingly and defending the interests of Turkey’s enemies and global arms companies.

Turkey’s president is to head a Cabinet meeting next week and announced that Thursday’s visit to Azerbaijan’s capital Baku would be comprehensively assessed.