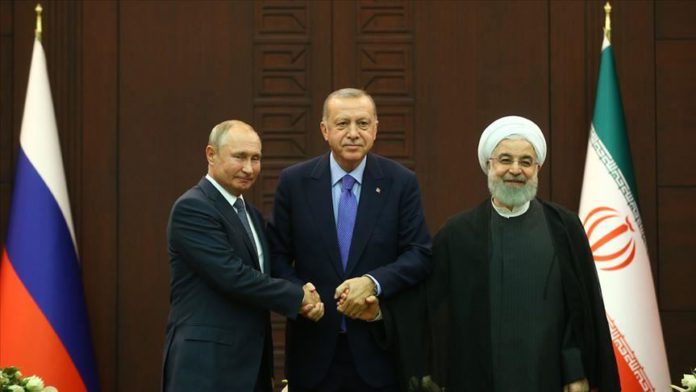 The leaders of Turkey, Russia, and Iran on Wednesday expressed their commitment to “the sovereignty, independence, unity and territorial integrity” of civil war-torn Syria.

Recep Tayyip Erdogan, Vladimir Putin, and Hassan Rouhani released a 14-item statement after a videoconference where they discussed the current situation in Syria.

The leaders reviewed the developments following their last meeting in Ankara last September and “reiterated their determination to enhance the trilateral coordination in light of their agreements,” according to the statement.

The leaders “emphasized their strong commitment to the sovereignty, independence, unity and territorial integrity of the Syrian Arab Republic as well as to the purposes and principles of the UN Charter,” the statement said.

They also stressed that “these principles should be universally respected and that no actions, no matter by whom they were undertaken should undermine them.”

The leaders “rejected all attempts to create new realities on the ground under the pretext of combating terrorism, including illegitimate self-rule initiatives, and expressed their determination to stand against separatist agendas aimed at undermining the sovereignty and territorial integrity of Syria as well as threatening the national security of neighboring countries.”

They also “discussed the situation in the north-east of Syria, emphasized that security and stability in this region can only be achieved on the basis of preservation of the sovereignty and territorial integrity of the country and agreed to coordinate their efforts to this end [and] Expressed their opposition to the illegal seizure and transfer of oil revenues that should belong to the Syrian Arab Republic.”

They “reaffirmed the determination to continue cooperation in order to ultimately eliminate DAESH/ISIL, Al-Nusra Front and all other individuals, groups, undertakings and entities associated with Al-Qaeda or DAESH/ISIL, and other terrorist groups, as designated by the UN Security Council, while ensuring the protection of civilians and civilian infrastructure in accordance with international humanitarian law,” according to the statement.

Turning to Idlib, northwestern Syria, just south of the Turkish border – a province covered by a Turkish-Russian cease-fire agreement – the leaders also “reviewed in detail the situation in the Idlib de-escalation area and underscored the necessity to maintain calm on the ground by fully implementing all agreements on Idlib.”

The statement added that they “rejected all unilateral sanctions which are in contravention of international law, international humanitarian law and the UN Charter, particularly in the face of the COVID-19 pandemic.”

In other points in the statement, the presidents also:

“Emphasized, in this regard, the critical need to ensure rapid, safe and unhindered humanitarian access throughout Syria in order to alleviate the suffering of the Syrian people, and, called upon the international community, particularly the UN and its humanitarian agencies, to increase their assistance to all Syrians without discrimination, politicization and preconditions,

“Reaffirmed their conviction that there could be no military solution to the Syrian conflict and that it could only be resolved through the Syrian-led and Syrian-owned, UN-facilitated political process in line with the UN Security Council Resolution 2254.

“Emphasized in this regard the important role of the Constitutional Committee in Geneva, created as a result of the decisive contribution of the Astana guarantors and the implementation of the decisions of the Syrian National Dialogue Congress in Sochi.”

Constitutional Committee to reconvene in August

The three leaders also “welcomed the agreement to hold the third meeting of the Constitutional Committee in August 2020 and reaffirmed the readiness to support its work through continuous interaction with its members and the UN Secretary-General’s Special Envoy for Syria Geir O. Pedersen, as facilitator, in order to ensure its sustainable and effective work.”

The committee, tasked with drawing up a new constitution for Syria, adjourned last November amid disagreements between regime and opposition members.

The leaders further “reaffirmed their determination to continue operations on the mutual release of detainees/abductees within the framework of the respective Working Group of the Astana format. Underscored that the Working Group was a unique mechanism, that had proved to be effective and necessary for building confidence between the Syrian parties, and agreed to take measures to continue its work.”

They “highlighted the need to facilitate safe and voluntary return of refugees and internally displaced persons (IDPs) to their original places of residence in Syria, ensuring their right to return and right to be supported,” the statement added.

The statement added that the Turkey, Russia, and Iran call on the international community to “provide appropriate contributions for their resettlement and normal life as well as to undertake greater responsibility in burden-sharing and to enhance their assistance to Syria, inter alia by developing early recovery projects, including basic infrastructure assets – water and power supply facilities, schools and hospitals as well as the humanitarian mine action.”

Turning to the US last year recognizing Israel’s illegal annexation of Syria’s Golan Heights, the statement “reaffirmed the necessity to respect universally recognized international legal decisions, including those provisions of the relevant UN resolutions rejecting the occupation of Syrian Golan, first and foremost UN Security Council Resolution 497 and thus condemned the decision of the US Administration on the occupied Syrian Golan, which constitutes a grave violation of international law and threatens regional peace and security,

“They consider Israeli military attacks in Syria as destabilizing and violating the sovereignty and territorial integrity of this country and intensifying the tension in the region,” the statement added.

The leaders also confirmed their intention to “strengthen trilateral coordination in different fields in order to promote joint economic cooperation” and “agreed to assign their representatives with the task of holding the next International Meeting on Syria in the Astana format as soon as possible.”

According to the statement, the next tripartite summit will be held as soon as possible in Iran at the invitation of President Hassan Rouhani.