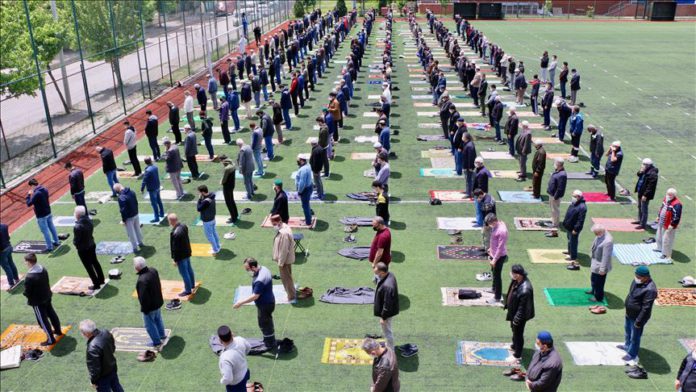 Turkey on Friday partially resumed mass prayers in mosques, including Friday prayers, as the country began easing measures against the novel coronavirus pandemic.

After a 74-day-halt due to measures to stem the spread of COVID-19, Friday prayers — congregational prayers performed by Muslims just after noon — were performed throughout the country in mosques with adequate courtyard or open areas, which have been singled out with the cooperation of the local governorships.

Unlike the normal congregational prayers inside the mosques that people stand in line next to each other, Friday prayers today were performed mostly outdoors by keeping a social distance. Wearing masks was mandatory for everyone.

Masks and single-use prayer rugs were also being distributed to people who didn’t have one by the mosque personnel and other assigned authorities.

The prayers were kept short, while imams — people who lead prayers — strictly followed the khutbah, or sermons, recited before the collective prayer.

The materials considered to raise the risk of the virus’ spread — such as prayer beads, reading desks, and shoehorns — were not allowed in mosques.

To keep the common space to a minimum, places such as ablution rooms and toilets remained closed.

On Thursday, Ali Erbas, head of Turkey’s Religious Affairs Directorate, told Anadolu Agency that open areas, marketplaces close to mosques without a courtyard will be also used for prayers.

At other times, the mosques will be kept open for those who want to perform individual prayers.

Erbas also said that 1,003 mufti offices across Turkey will sacrifice 1,003 animals as a grace of reuniting with mosques and collective prayers, and the meats of sacrificed animals will be distributed to people in need in those territories.

On March 16, the country’s top religious body announced a nationwide suspension of congregational prayer gatherings, including Friday prayers, in the wake of the outbreak.