TurkishPress
Home News Turkey rescues some 5,693 irregular migrants in 1st half of 2021 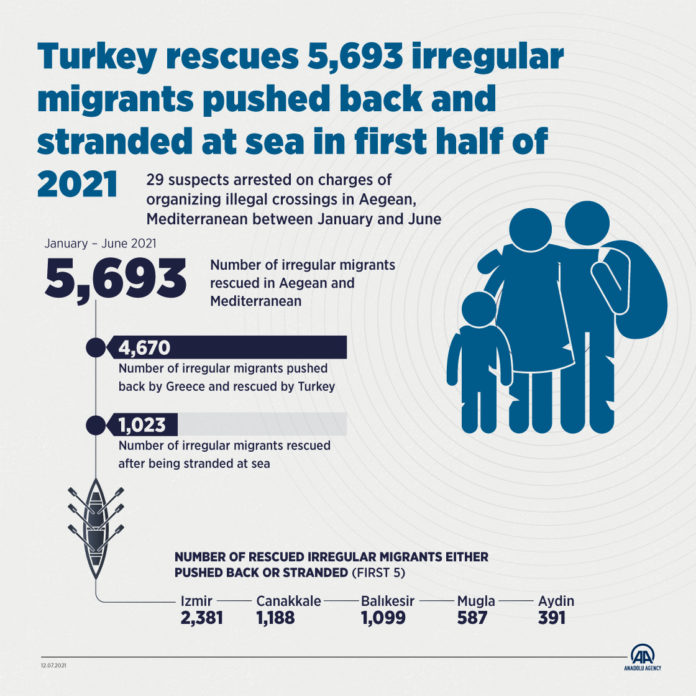 The Turkish Coast Guard rescued 5,693 irregular migrants, most of whom were pushed back by Greece, from the Aegean and Mediterranean seas in the first half of 2021.

According to figures released by Turkish Coast Guard, 4,670 were pushed back into Turkish territorial waters by Greece were rescued between January and June.

Coast Guard teams also rushed to the aid of the 1,023 others who were stranded due to engine failure, collisions with rocks, or leaking in water while trying to illegally cross the sea.

In addition to rescue operations, the teams caught 1,243 irregular migrants in the first half of 2021.

Some 29 people were arrested on charges of organizing illegal crossings across the Aegean and Mediterranean seas during this time period.

The largest number of rescue operations for irregular migrants, who were pushed back or stranded, were held in Izmir.

Some 261 irregular migrants who were trapped for various reasons off the coast of Izmir, were rescued this year as of the end of June. The Turkish Coast Guard also came to the rescue of 2,120 irregular migrants, including children and women, whose engines were dismantled by Greek elements and left to die in rubber dinghies or life jackets at sea.

Also, 434 irregular immigrants and six Turkish nationals were caught while trying to cross to Greece from Izmir.

They caught 412 irregular migrants in Mugla and 327 in Canakkale in different operations.

Some 47 irregular migrants trapped in Antalya, Mersin, and Edirne were rescued by the coast guard, and 70 others caught trying to cross the borders illegally.

US says will eliminate Iran missiles sent to Venezuela