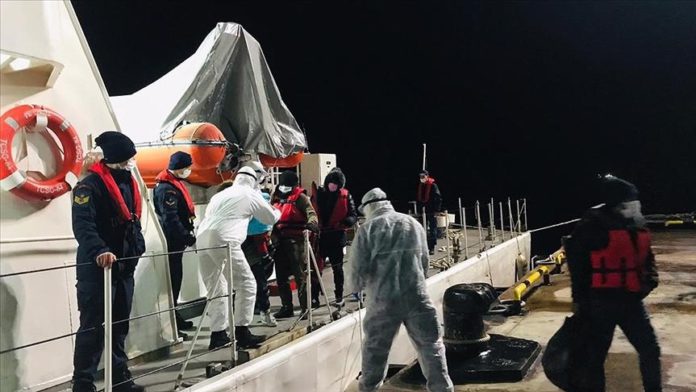 A Coast Guard team was dispatched to an area off Gunes Island in western Balikesir province after learning of a group of asylum seekers stranded on a lifeboat, said a source, who asked not to be named due to restrictions on speaking to the media.

Thirteen asylum seekers wanted to reach Lesbos Island in Greece, said the source. They were referred to the Coast Guard Command on Cunda Island in Turkey.

And 28 asylum seekers were held in western Izmir province after asking the coast guard to be rescued in Dikili district.

“We spent three hours on the boat and reached Greece. We saw a boat. It was the Greek boat and we asked them for help,” according to a woman on the boat. “They came and started following us. Then they took our engine and told us to go back. They followed us until the Turkish Coast Guard rescued us.”

Cameras recorded the moment when the rubber boat was pushed into Turkish territorial waters by Greece.

Turkey opened its gates to irregular migrants in 2020 after accusing the EU of failing to keep its promises under a 2016 migrant deal.