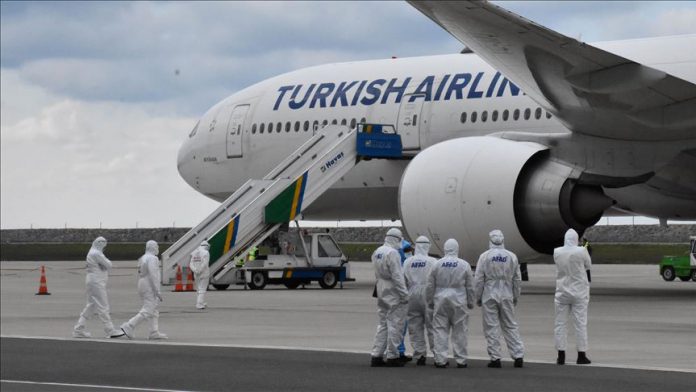 Turkey brought back a total of 755 of its nationals from countries worldwide Monday as part of ongoing repatriation efforts for Ramadan amid the coronavirus pandemic.

Some 162 Turkish nationals returning from Qatar on a special Turkish Airlines flight arrived at Esenboga Airport in the capital Ankara while 292 citizens were taken to Izmir province.

After health checks, the arrivals in Ankara were sent to Cankiri province and those in Izmir were sent to Manisa province for quarantine.

A total of 39 citizens from Iran landed in Mardin province.

Following mandatory health checks, they were taken to dorms to be quarantined for two weeks.

Meanwhile, 10 Turkish citizens landed in Istanbul from Ukraine and were sent to Yalova province for quarantine.

In addition, 252 Turkish citizens who were brought back from Saudi Arabia landed in Istanbul.

They were taken to Bursa province after health checks.

After originating in Wuhan, China last December, COVID-19, the disease caused by the coronavirus, has spread to at least 185 countries and regions across the world. Europe and the US are currently the worst-hit.

The pandemic has killed more than 210,800 people with the total number of cases exceeding 3 million, while at least 892,500 have recovered, according to figures compiled by Johns Hopkins University of the US.