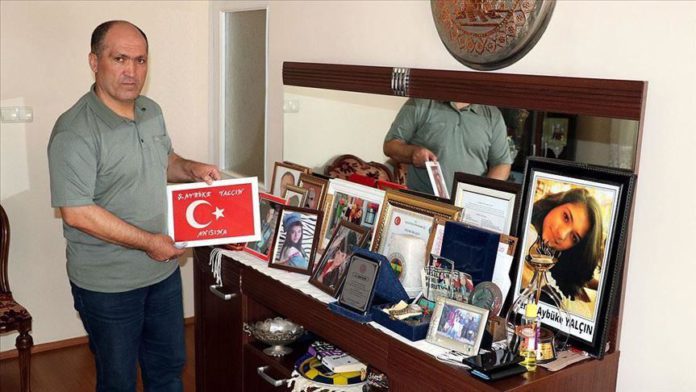 Turkey on Tuesday observed the third death anniversary of a music teacher, who was martyred in a PKK terror attack.

Senay Aybuke Yalcin was martyred in the southeastern province of Batman three years ago. She was 22 years old.

“On the third year of her martyrdom, I commemorate our teacher Aybuke Yalcin, who was murdered in Batman by a terrorist organization. I respectfully commemorate all our teachers who contributed to the well-being of our nation and the development of our country, especially the martyred ones,” Turkish President Recep Tayyip Erdogan said on Twitter.

Yalcin succumbed to her wounds in a brazen attack targeting the car of the mayor of Kozluk region in Batman. She was riding a minibus which was part of the convoy.

The perpetrator of the attack was neutralized in March 2018 by Turkish security forces.

In its more than 30-year terror campaign against Turkey, the PKK — listed as a terrorist organization by Turkey, the US and the EU — has been responsible for the deaths of nearly 40,000 people, including many women, children and infants.