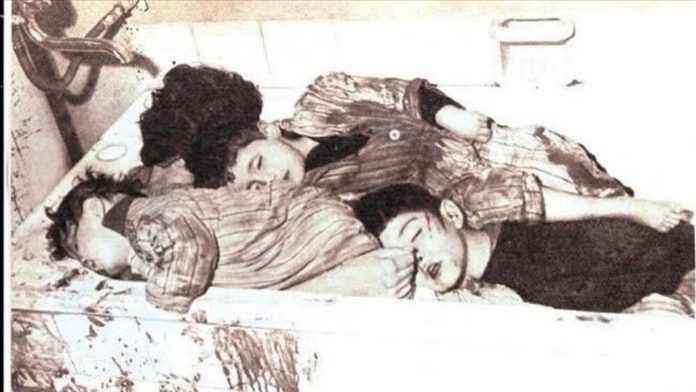 Turkey on Monday remembered the “Bloody Christmas” martyrs of the Turkish Republic of Northern Cyprus (TRNC) in 1963.

“57 years ago today, planned and brutal attacks were launched against our Turkish Cypriot brothers by the Greek terrorist organization EOKA,” the Defense Ministry said on Twitter.

“We commemorate our martyrs with mercy on the anniversary of these attacks which started the conflicts on the island and went down in history as #KanliNoel [BloodyChristmas],” it added.

While the Turkish Cypriots were discriminated and alienated by the Greek Cypriots in state institutions, systematic and comprehensive attacks began on Dec. 21, 1963 when a bloody incident, which was later termed as “Bloody Christmas”, took place.

A total of 103 Turkish Cypriot villages were attacked, leading to hundreds of deaths. In fact, the bloody campaign led to the displacement of 30,000 Turkish Cypriots, who had to take shelter in an area constituting merely 3% of the island.

In 1967, a military junta ousted the government in Greece and started to destabilize the island. The junta struck two villages in Cyprus — Bogazici and Gecitkale.

Bulent Ecevit, then-prime minister of Turkey, instructed the army to take action and Cyprus Peace Operation was launched on July 20, 1974.

With fighter jets flying low over the land and paratroops deployed on the island, Turkey prevented the annexation of Cyprus and brought protection to weary Turkish Cypriots.

The peace operation proved Turkey’s claims about the persecution of Turks as a number of mass graves were unveiled in some Turkish Cypriot towns on the island.

The success of the operation paved the way for the establishment of the Turkish Federated State of Cyprus on Feb. 13, 1975, with Rauf Denktas as president.

On Nov. 15, 1983, the Turkish Federated State of Cyprus held an extraordinary session and the members of the parliament unanimously approved the establishment of the TRNC.

38 get death sentence in India over 2008 Ahmedabad bombings