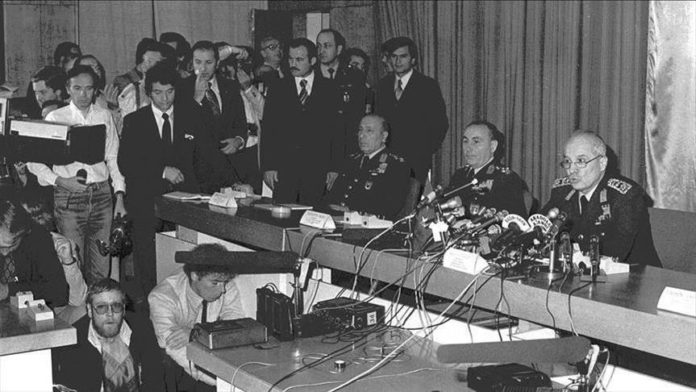 Even after four decades, the Sept. 12, 1980 bloody coup still stands as a black stain in Turkish political history.

It is remembered as the coup that led to the detention of hundreds of thousands along with mass trials, torture and executions.

Forty years ago, Chief of General Staff Kenan Evren, the leading figure of the military coup, appeared on television and declared a military intervention, officially confirming the coup that would drastically affect the country in coming years.

The putschists gained control of the country early on the morning of Sept. 12 following the intervention by the armed forces with the National Security Council, along with commanders of the land, air and naval forces, as well as the commander of gendarmerie forces.

Torture, ill-treatment and unhealthy conditions at prisons left 299 people dead. That still haunts the conscience of the Turkish nation.

Some survivors said they went through physical, mental and spiritual torture for years.

Among those executed was Erdal Eren at the age of 17.

To this day, Evren is harshly criticized for remarks about Eren’s execution. “Shall we not hang them but instead feed?” he asked.

A court changed Eren’s age in an effort to hold the execution.

A total of 14,000 people were stripped of their citizenship and 30,000 dismissed from posts, including 4,000 teachers and academics. Culture and the arts suffered its share as more than 1,000 movies were banned.

The new Constitution forged by the National Security Council received 98% of votes at a referendum held in 1982 with many questioning the reliability of the results as the military junta was in full charge of all organizations.

The coup plotters added the 15th temporary Article in the Constitution which helped them live freely without risk of being tried. But Turkish democracy slapped coup plotters as a new referendum held Sept. 12, 2010, abolished the article and paved the way for trials.

The men were accused of partly altering or completely eliminating the constitutional order of the republic and disrupting parliament.

Neither of them participated physically in their trials, due to health conditions, and they rejected the charges.

The courts sentenced them to prison and the former top commanders were stripped of military decorations.