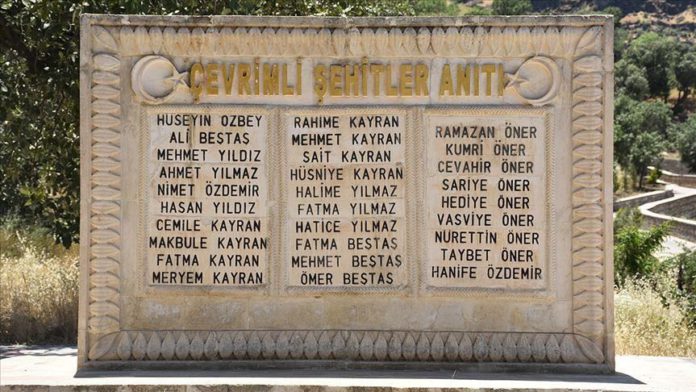 Turkey on Wednesday remembered 27 citizens who were massacred by PKK terrorists 30 years ago in southeastern Sirnak province.

They were burned alive in their houses in the village of Cevrimli on June 10, 1990.

Ibrahim Ozbey, 56, a local official, told Anadolu Agency that he lost two of his brothers at the massacre and his legs in another PKK attack.

“Those who have religion, faith and conscience cannot accept such brutality,” he added.

Emin Yilmaz, 40, was only 10 years old when he lost his father at the massacre.

“We will never forget this heinous attack of the terrorist organization. We are in great sorrow,” Yilmaz said.

“Thirty years have passed without my father. We suffer in our pain,” he added.

Kadri Bektas, 40, said he can never forget what he saw that day.

“I survived the massacre by hiding, they would have probably killed me if I hadn’t hid. Not after 30 years, we will not forget this brutality even if it was 300 years,” Bektas said.