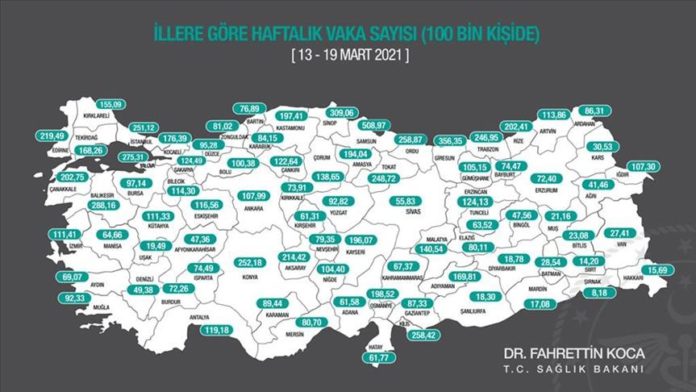 Turkey’s health minister on Saturday announced the latest weekly infection rates of the novel coronavirus across Turkey’s 81 provinces on March 13-19.

“We cannot ignore the virus. Nor should we let it take away our normal lives. We can achieve this by following the precautions,” Fahrettin Koca said on Twitter, sharing the statistics.

According to the data, Turkey’s Black Sea province of Samsun continued to have the highest number of cases this week with 508 per 100,000 people.

The southeastern provinces of Sirnak, Siirt, Hakkari, Mardin and Sanliurfa had the lowest COVID-19 infections per 100,000 people between the given dates.

The rate was 8 per 100,000 people in Sirnak province for the last week, up from four the previous week.

As of Saturday, Turkey confirmed more than 2.99 million cases, 29,959 fatalities, and over 2.8 million recoveries.

Since Turkey began a mass COVID-vaccination campaign on Jan. 14, it has administered over 13.05 million coronavirus vaccine jabs, according to official figures.

Over 8 million people to date have received their first doses of a vaccine against the coronavirus, while second doses were given to more than 5 million.

Since December 2019, the pandemic has claimed over 2.7 million lives in 192 countries and regions.

Over 122.62 million cases have been reported worldwide, with recoveries now numbering over 69.42 million, according to figures compiled by the US’ Johns Hopkins University.