On Friday a special committee released its annual report on Turkey’s state of emergency following the 2016 defeated coup by the Fetullah Terrorist Organization (FETO).

Under decree laws issued as part of the state of emergency, which began just after the defeated July 2016 coup and ended two years later, nearly 132,000 measures were taken, including nearly 125,700 dismissals from public service, the parliamentary report said.

A total of 126,783 applications were submitted to the commission as of Friday, it added.

While 120,703 decisions were issued by the commission, 6,080 applications remain pending.

The commission started its decision-making process on Dec. 22, 2017, and as of Friday, the commission has made 120,703 decisions – including 16,060 acceptances and 104,643 rejections. Sixty-one of the acceptance decisions were related to the opening of organizations that were shut down, such as associations, foundations, and TV channels.

“Accordingly, 95% of the applications have been decided since the date of the beginning of the commission’s decision-making process,” it said. 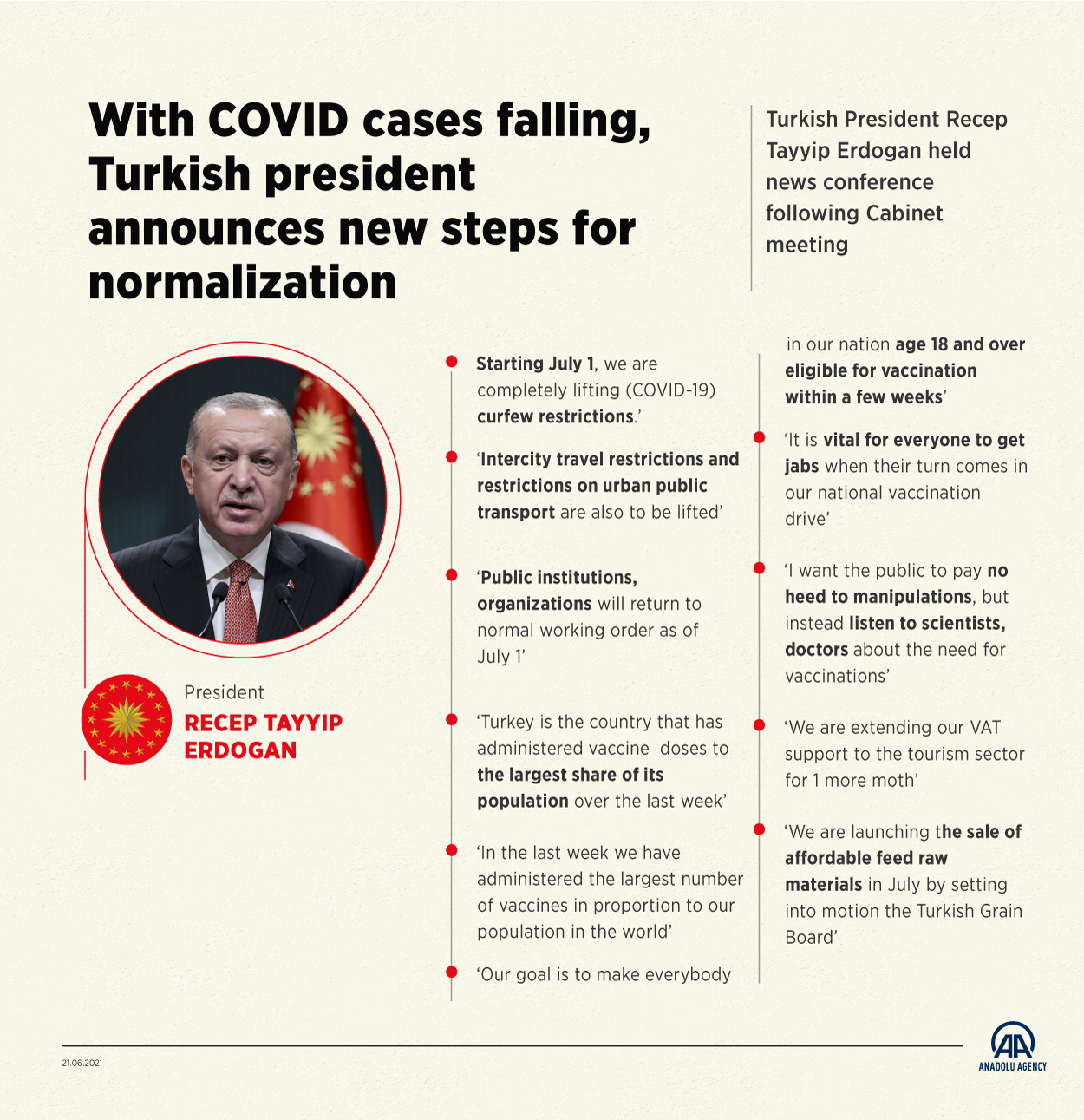 The commission decisions are circulated to institutions where the applicants last held office for the purpose of being notified. The procedure for re-appointment of those whose applications were accepted was carried out by the institution where they last held office or the Council of Higher Education where relevant, it added.

The parliamentary committee reviews and concludes applications concerning measures taken under the state of emergency decree laws, such as the dismissal of public officials, cancellation of scholarships, annulment of the ranks of retired personnel, and the closure of some institutions, all due to suspicion of involvement in the FETO terrorist group. 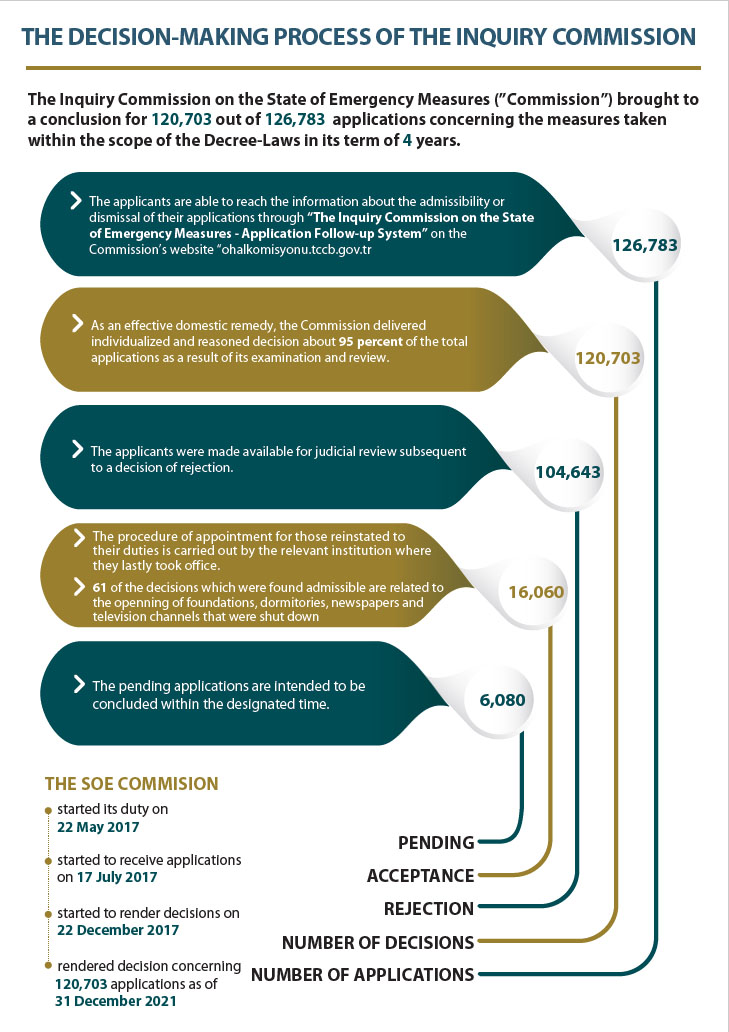 The commission employs 240 personnel, including 70 rapporteurs – judges, experts, and inspectors.

In its 2021 annual report, the Inquiry Commission on the State of Emergency Measures touched on the terror group FETO’s infiltration of public institutions, saying that “specially trained” FETO members were working to infiltrate the state and creating a “parallel structure.” 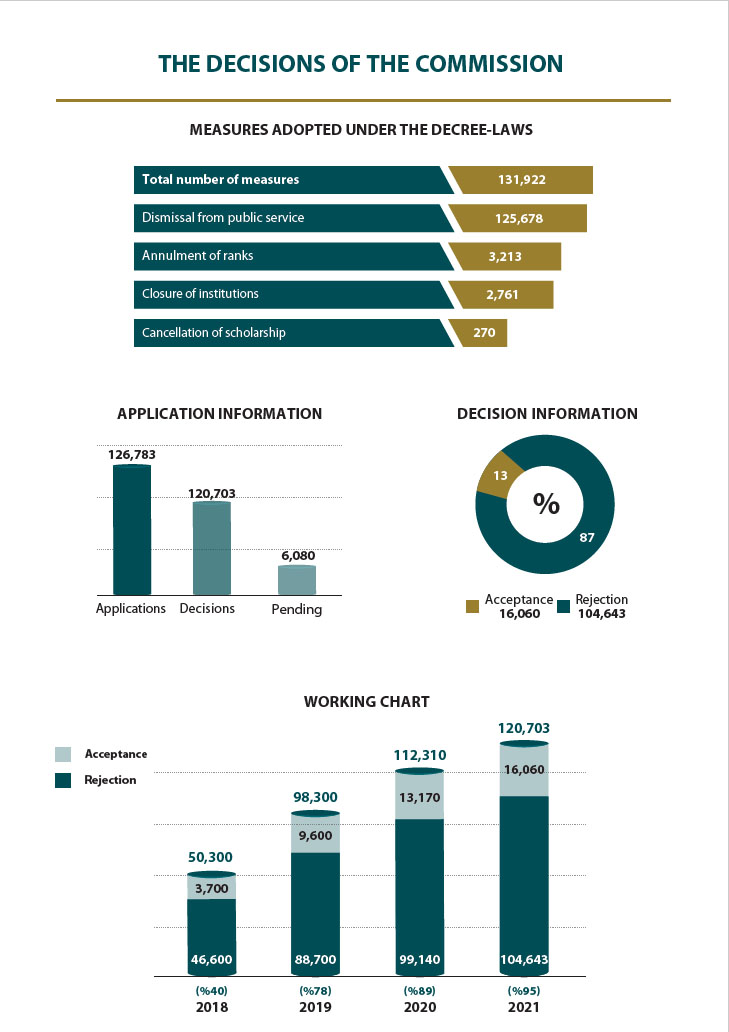 FETO and its US-based leader Fetullah Gulen orchestrated the defeated coup of July 15, 2016, which left 251 people killed and 2,734 wounded.

To infiltrate public institutions, FETO “prepared its members for KPSS (Public Personnel Selection Examination), institutional and academic exams in the organization’s secret houses and shared with these people the exam questions that they had obtained by illegal means,” the report said.

The report said that as part of FETO infiltration of schools, associations, foundations, etc., members of the terror group were trained in secret houses, dormitories, schools, and private teaching institutions, and that their main purpose was not to provide education but to provide human resources and train “adherents” to the organization.

The report also highlighted “irregularities” in the activities of companies, holdings, banks, foundations, and associations belonging to the group, saying that income raised from the public under the guise of aid was transferred to the terror group.

In this context, details of the terror group’s infiltration of NGOs were also revealed with examples from the commission’s decisions.