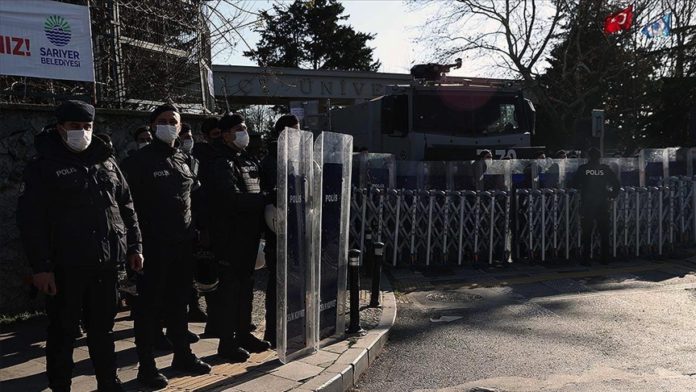 Thirty suspects who were recently arrested amid ongoing protests at Bogazici University in Istanbul, Turkey were released early Thursday on bail.

A total of 51 people detained by police Monday during the demonstrations at the university’s South Campus were brought to the Istanbul Court of Justice in Caglayan after the completion of procedures at the police station.

The questioning of the suspects in groups of six ened early in the morning.

The remaining 21 suspects were also released on bail on the same conditions.

On Tuesday, Turkish Interior Minister Suleyman Soylu said 79 of those arrested are members of terrorist organizations including the DHKP/C and TKP-ML.

Characterizing the appointment of Melih Bulu as a “trustee rector” of the prestigious university is a “fascist approach” and is not right, Soylu said.

The protests erupted after the appointment of Bulu, with many calling for his resignation.

The demonstrations intensified when two Bogazici University students were remanded in custody by a Turkish court for displaying a painting allegedly offensive to Islamic values on university grounds.

Authorities in a separate statement said 98 of those arrested were later released.