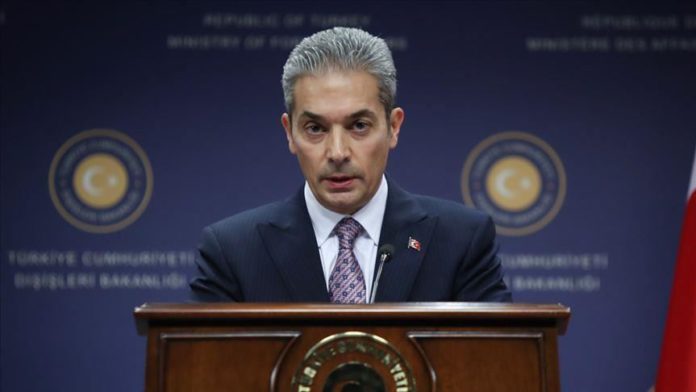 “We reject the unfounded and unfortunate allegations in the press release of the UN Human Rights Special Procedures,” Foreign Ministry spokesman Hami Aksoy said in a statement.

Aksoy said Turkey, extending its support to the internationally recognized Libyan government upon its request and pursuant to UN resolutions, emphasized from the very beginning that there was no military solution to the conflict in Libya.

“In this context, Turkey spares no effort to ensure a lasting and sustainable ceasefire and to reinvigorate the political solution process under the auspices of the UN.”

“We have serious reservations about the aim of this statement made without consulting with Turkey and based on some accusations whose accuracy, objectivity and source are questionable,” he said.

“The UN Human Rights Special Procedures is supposed to conduct its studies transparently and by considering the views of all parties instead of making biased and misleading public statements,” Aksoy added.

He asserted that “at this period when serious war crimes against innocent civilians,” and discoveries of mass graves in Tarhuna province after it was recently liberated from Haftar’s militias, it would be “more appropriate if the UN Human Rights Special Rapporteurs investigate primarily the crimes against humanity committed by militia and mercenaries loyal to putschist and pirate Khalifa Haftar instead of making speculative allegations.”

The report alleged that Turkey has engaged in large-scale recruitment efforts and the transfer of Syrian fighters to take part in hostilities in support of the government.

“These fighters were recruited through armed factions affiliated with the Syrian National Army that have been accused of serious human rights abuses in Syria,” alleged Chris Kwaja, who chairs the UN Working Group.

It also claimed that thousands of Syrian men, including boys under 18 years, have reportedly been sent to Libya via Turkey in recent months.

“We are concerned that these children come from an extremely vulnerable social and economic situation and are being exploited for the purpose of recruitment as mercenaries,” Kwaja said.