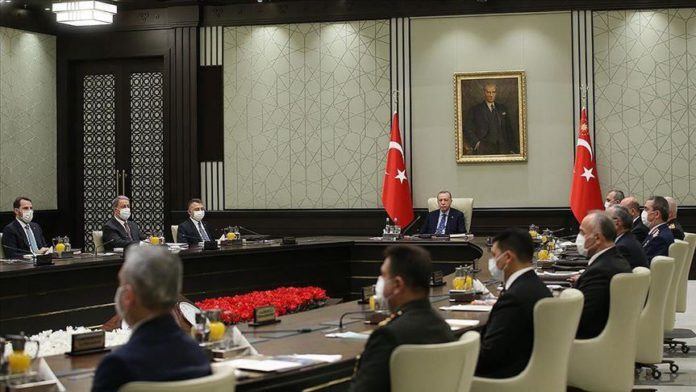 Turkey reiterated its support to Azerbaijan against Armenian border attacks, according to a National Security Council statement on Wednesday.

Turkey called on Armenia to stop its aggression and withdraw from Azerbaijani lands it is occupying, the statement said following the council meeting headed by President Recep Tayyip Erdogan in the Turkish capital Ankara.

On July 12, the Armenian army violated a cease-fire and attacked Azerbaijani positions with artillery fire towards the Tovuz border district, withdrawing after losses following retaliation from the Azerbaijani army.

During its aggression, Armenia martyred 12 Azerbaijani soldiers, including high-ranking officers, and one civilian, besides wounding four troops.

Turkey will continue to stand by people of Libya against all kinds of tyranny, the statement added.

Libya has been torn by civil war since the ouster of late ruler Muammar Gaddafi in 2011. The country’s new government was founded in 2015 under a UN-led agreement, but efforts for a long-term political settlement failed due to a military offensive by warlord Khalifa Haftar’s forces, backed by Egypt and the UAE.

Libya’s legitimate government has been under attack by Haftar’s forces since last April, and more than 1,000 people have been killed in the violence.

The government launched Operation Peace Storm against Haftar in March to counter attacks on the capital Tripoli, and liberated strategic locations, including the Al-Watiya airbase and city of Tarhuna.

Haftar has the support of the UAE, Egypt, and Russia while the UN-recognized government is backed by Turkey.

On the long-divided Mediterranean island, the council said Turkey will not allow any attempt that could harm peace and stability on Cyprus.

Earlier on Wednesday, Turkey hit back at Greek claims of “illegal exploration” in the Eastern Mediterranean amid new drilling by a Turkish vessel.

Last May, Turkish-flagged drillships began offshore drilling operations in areas off the island of Cyprus. The areas fall entirely within the Turkish continental shelf registered with the UN and in permit licenses the Turkish government in previous years granted to Turkish Petroleum Corporation, the country’s national oil company.

Turkey sees energy as an incentive for political resolution on the island and peace in the wider Mediterranean basin, not a catalyst for further tensions.

The decades since have seen several attempts to resolve the Cyprus dispute, all ending in failure. The latest, held with the participation of the guarantor countries – Turkey, Greece, and the UK – came to an end without any progress in 2017 in Switzerland.

Blast inside mosque kills 4 in Afghanistan

June 12, 2020
We use cookies to ensure that we give you the best experience on our website. If you continue to use this site we will assume that you are happy with it.Ok