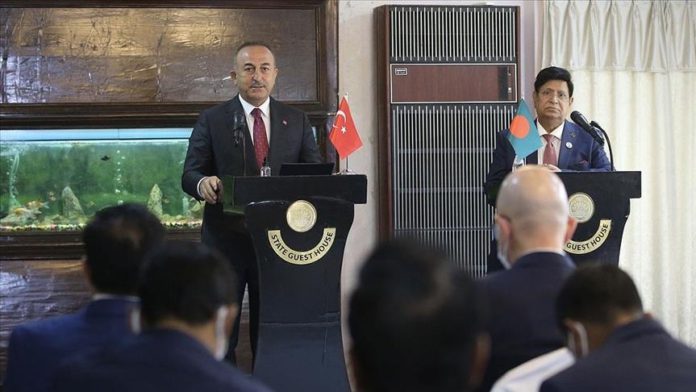 Turkish foreign minister on Wednesday reiterated his country’s support for the vulnerable Rohingya refugees in Bangladesh.

“As Turkey, we have been supporting these vulnerable people and Bangladesh from the beginning. In the future we will continue to offer support,” Mevlut Cavusoglu said at a joint news conference with his Bangladeshi counterpart AK Abdul Momen.

Cavusoglu also announced Turkey’s plan to build a hospital of international standards in Bangladesh in the nearest future.

According to Amnesty International, more than 750,000 Rohingya refugees, mostly women and children, fled Myanmar and crossed into Bangladesh after Myanmar forces launched a crackdown on the minority Muslim community in August 2017, pushing the number of persecuted people taking shelter in Bangladesh above 1.2 million.

Underscoring that it is necessary for the Rohingya people to return to their homes, Cavusoglu said: “We will continue making efforts at every level, and we need to also continue working with Myanmar for safe, voluntary and dignified return [of Rohingya].”

About the relocation of Rohingya to a remote island Bhasan Char, the top Turkish diplomat said Bangladeshi government should work with the international community, especially with the UN, UNHCR and other agencies on the matter.

Regarding plans to build a hospital in Bangladesh, Turkish foreign minister said: “We are working on different models, and hopefully in the future, we will be able to build the hospital.”

Cavusoglu also commended Bangladesh’s efforts to stem the spread of the novel coronavirus and said: “I would like to congratulate Prime minister Sheikh Hasina and the government here for this successful fight against COVID-19.”

“Turkey, during the pandemic, is also the leading country in [terms of extending] humanitarian assistance,” he added.

Cavusoglu said the bilateral trade volume between Turkey and Bangladesh was around $1 billion in 2019, while it reached $754 million in the first 10 months of this year despite the ongoing pandemic.

For his part, Bangladeshi Foreign Minister AK Abdul Momen described Turkey as a friendly country, and said the bilateral relationship in terms of trade and commerce between the two countries will be enhanced in coming years.

Bangladesh is ready to work with Turkey in this difficult time for the common causes of humanity when the whole world has come to a standstill due to the coronavirus pandemic, Momen said.

He also hailed Turkey for its efforts in fighting COVID-19.

Referring to Turkish humanitarian assistance worldwide during the pandemic, Momen said that Bangladesh is one of the 140 countries that has received aid and medical assistance from Turkey.

“The government and people of Turkey will work to extend cooperation to our common goals and prosperities,” he added.

He also hoped that in the convenient time in future a monument of Bangladesh’s founding father Sheikh Mujibur Rahman will be constructed in Turkey, while a monument of the Republic of Turkey’s founder Mustafa Kemal Ataturk will be built in Bangladesh.

Terming Turkey as one of the leading countries that have provided humanitarian aid for the persecuted Rohingya people, Momen requested more cooperation from Turkey.

Responding to a question, Cavusoglu said Turkey will also work with Bangladesh to further extend educational facilities for Rohingya.

As part of his official visit to Bangladesh, Cavusoglu earlier paid a visit to the memorial of the country’s founder Sheikh Mujibur Rahman.

“Visited Bangabandhu Sheikh Mujibur Rahman Memorial Museum at the 100th birth anniversary of the Father of the Nation of Bangladesh, laid a wreath and signed the book in the respected memory of Bangabandhu,” he wrote on Twitter.

Earlier in September, the Bangladeshi foreign minister visited Turkey to inaugurate the newly built Bangladesh Embassy in Ankara, while Hasina virtually joined the program as the chief guest.​​​​​​​

'Vaccination only way out of COVID-19 pandemic'