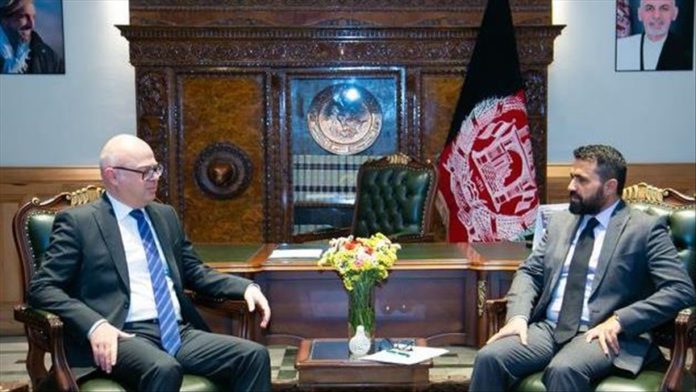 Turkey has assured Afghanistan of its support in the wake of the US withdrawal, the Afghan Foreign Ministry said Thursday following a meeting of the Turkish ambassador with the deputy foreign minister in Kabul.

Deputy Foreign Minister Mirwais Nab praised the efforts of the Republic of Turkey in supporting the peace process in Afghanistan and stressed the importance of Turkey’s effective role in the success of the negotiations and the provision of a lasting and just peace based on the will of the Afghan people during a meeting with Ambassador Cihad Erginay.

According to the Foreign Ministry, Nab told Erginay that the Afghan defense and security forces have been able to repel many of the terrorist attacks by the Taliban and their supporting foreign terrorists. It said that while emphasizing that there is no military solution to the Afghan problem, Nab expressed the commitment and good faith of the Afghan government to reach a political solution.

The Turkish ambassador reaffirmed his country’s continued support and assistance to Afghanistan in the post-withdrawal phase as well as Ankara’s readiness to make any efforts to find a political solution to the Afghan issue, it added.

The two stressed the importance of working together to ensure peace and stability in the country and stressed the need to continue consultations to strengthen the consensus to persuade the Taliban to end the violence and return to the negotiating table.

The Turkish envoy said last week that the Turkish government was working to ensure the support of regional countries, especially Pakistan, to achieve lasting peace and stability in Afghanistan.