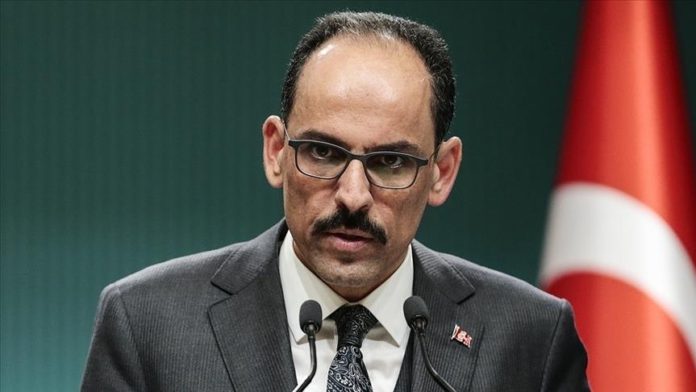 Turkey on Monday reiterated its call on Israel to end its violent attacks on Palestinians in Jerusalem amid recent Israeli police attacks on worshippers in the Al-Aqsa Mosque.

Presidential spokesman Ibrahim Kalin said on Twitter: “Israel must stop attacking Palestinians in Jerusalem and prevent the occupiers/settlers from entering the Holy Mosque. Israel bears sole responsibility for any violence.”

He urged the international community to “act to stop this never-ending Israeli aggression against unarmed civilians in their own land.”

“Those who do not speak out against this atrocity should not talk about Middle East Peace Process,” Cavusoglu said.

He expressed Turkey’s solidarity with the Palestinian people, saying it “will continue to be the voice of our Palestinian brothers and sisters and defend their rights!”

“To humanity, we say: It’s time to put this apartheid state in its place! That is our historic and human responsibility. We will keep fighting this oppressive order even if we are left all alone!” Altun said on Twitter.

“Turkey has had a strong fight against this tyrannical order so far under the leadership of our President Recep Tayyip Erdogan,” he added.

“International public opinion must urge Israeli state and its extremist groups to stop reckless and irresponsible practices,” he said.

Palestinians in Jerusalem in recent days have protested in solidarity with the residents of Sheikh Jarrah neighborhood amid attacks by Israeli police.

The situation escalated after a ruling by the Israeli Central Court in East Jerusalem, which approved a decision to expel seven Palestinian families from their homes in the neighborhood in favor of Israeli settlers at the beginning of this year.

On Monday, at least 215 Palestinians were injured when the Israeli police stormed the Al-Aqsa Mosque in occupied East Jerusalem and attacked Palestinians who were on guard to prevent raids by extremist Jews.

Earlier, extremist Jews called for a raid on Al-Aqsa Mosque on Monday to celebrate the anniversary of the Six-Day War in 1967, when Israel occupied East Jerusalem, as “Jerusalem Day” according to the Hebrew calendar.