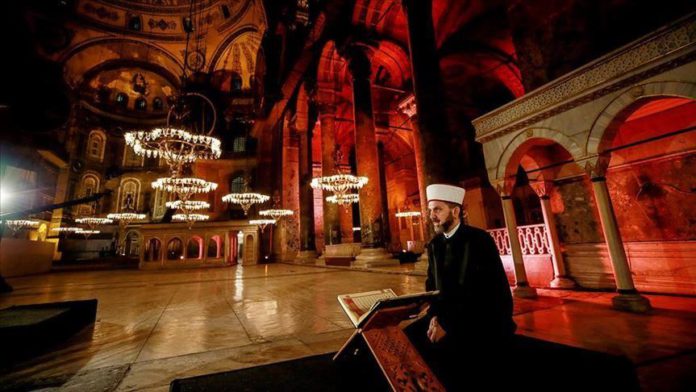 Turkey on Saturday shot back at an objection from Greece on the reading of passages from the Muslim holy book, the Quran, in the Ayasofya (Hagia Sophia), a landmark mosque-converted-museum in Istanbul.

“The fact that Greece, the only remaining European country without a mosque in its capital, is disturbed by the recital of the Holy Quran in Hagia Sophia is a case in point illustrating the intolerant psychology of this country, especially at a time when calls to prayer can be heard from minarets in Europe and the importance of principle of mutual respect is increasingly valued,” said the written online statement.

Aksoy’s statement came after earlier remarks from the Greek Foreign Ministry saying the move did not comply with the UNESCO Convention Concerning the Protection of the World Cultural and Natural Heritage.

“Turkey has acted neither against the monumental status of Hagia Sophia, nor the 1972 UNESCO Convention Concerning the Protection of the World Cultural and Natural Heritage. On the contrary, thanks to Turkey’s care and attention to the Historical Sites of Istanbul, these sites have survived for present generations as cultural heritages,” Aksoy underlined.

He also criticized “recent efforts of certain circles in Greece” to use the novel coronavirus pandemic as a pretext to silence the Muslim call to prayer in Western Thrace “which has been recited for centuries.”

Aksoy also emphasized that the Hagia Sophia would remain a “significant treasure of Turkey and humanity,” and will continue to be protected as such.

“We invite Greece to free itself of its mindset deriving from history,” he added.