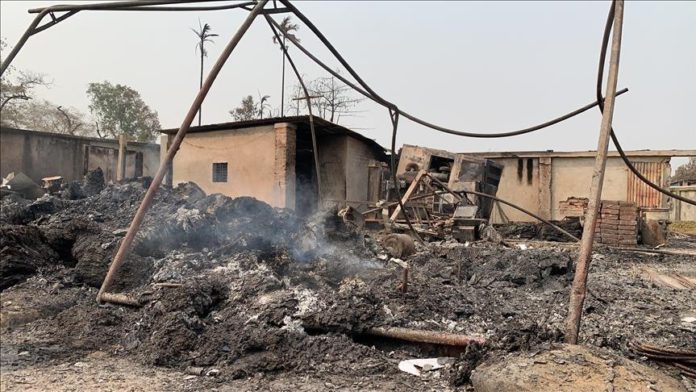 Turkey has swiftly responded to a massive fire in the Rohingya refugee camp that damaged a Turkish field hospital, and a team from Ankara is currently working to rebuild the hospital in southeastern Bangladesh.

A senior official from Turkey’s Disaster and Emergency Management Authority (AFAD) arrived in Bangladesh’s southeastern Cox’s Bazar district with a team to rebuild the hospital and shelters for Rohingya refugees affected by the deadly blaze on March 22.

A total of 26 personnel from the Turkish Health Ministry, AFAD, and Turkey’s Housing and Development Administration reached Bangladesh on Saturday.

The team has launched the construction work on the field hospital earlier this week on the same site.

Salih Altinay, AFAD’s head of foreign affairs and humanitarian aid, told Anadolu Agency from the spot that the new hospital would have an open area of 4,000 square meters and a closed area of 1,400 square meters. He added that both open and closed sites would provide health care facilities to Rohingya refugees in the camp.

He said the aid agency relocated its humanitarian operations from Myanmar to Bangladesh’s Cox’s Bazar in 2017, shortly after the human tragedy involving Rohingya Muslims leaving their homes.

Altinay referred to Myanmar’s military crackdown on Rohingya in the western Rakhine state in August 2017 that killed thousands of Muslims and forced over 750,000 to flee neighboring Bangladesh for a safe salter.

The AFAD had built a full-fledged field hospital in early 2018 that provided all kinds of health care services with ten doctors and 20 health workers.

The hospital had been providing medical services to 1,000 patients every day until it was entirely destroyed by fire ten days ago.

It had served a total of 512,101 patients since its establishment in 2018, according to hospital records.

The Turkish state-run aid agency had also constructed 4,620 bamboo-made shelters for the refugees in the area.

“Our [field] hospital and approximately 1,400 bamboo houses [for Rohingya refugees] became unusable in the fire that occurred on March 22,” Altinay said.

Now Turkey is building a new field hospital to be operational for Rohingya very soon, according to him.

“We will [also] start the reconstruction of shelters [affected by the deadly blaze] as soon as possible,” he went on to say.

On the instructions of Turkish President Recep Tayyip Erdogan, the AFAD, along with the ministries of Health, Environment, and Urbanization, have started providing aid to the refugees, Altinay said.

According to the UN refugee agency, the most devastating fire in the history of Rohingya refugees in Bangladesh killed 15 people, gutted over 10,000 shelters, and displaced around 45,000 refugees.​​​​​​​