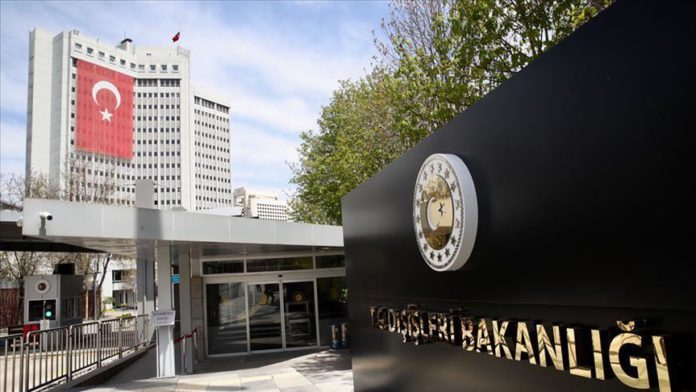 Turkey on Tuesday said Hamas is a democratically elected actor in Gaza representing a significant reality in the region, rebuffing US objections to President Tayyip Erdogan’s meeting this week with Hamas members in Turkey.

Turkey fully rejects the US statement, which crossed the line, said a Foreign Ministry statement, adding that designating Hamas representatives as terrorists would not contribute to regional peace or stability.

Accusing the US administration of openly supporting the terrorist YPG/PKK and hosting the ringleader of the Fetullah Terrorist Organization (FETO), the terror group behind the 2016 defeated coup in Turkey, the ministry said the US has no right to comment on third countries’ politics.

The statement added that after the US administration designated Hamas a terrorist group, it closed the Palestine Liberation Organization (PLO) mission in Washington, meaning American officials cut their ties with the Palestinian Authority, isolating itself from regional realities.

It called on the US to use its regional influence and power to serve not the interests of Israel but to follow more balanced policies in a bid to bring a righteous and fair solution to the Palestinian-Israeli conflict.

Ismail Haniyeh, the political head of Hamas, and a delegation paid a visit to Turkey over the weekend and met Turkish President Recep Tayyip Erdogan in Istanbul on Saturday.

The US has allied itself with the YPG, the PKK’s Syrian branch, as a supposed ally against Daesh/ISIS.

Despite years of requests from Turkey, the US has failed to extradite terror group FETO’s leader, Fetullah Gulen.

Tea becomes hope for farmers amid record production in Bangladesh