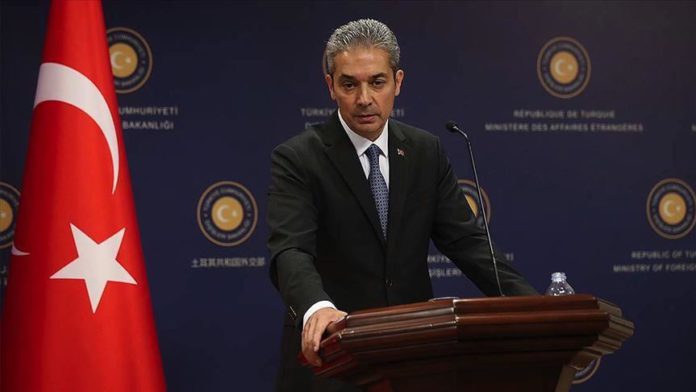 Turkey on Wednesday hit back at Greek claims of “illegal exploration” in the Eastern Mediterranean amid new drilling by a Turkish vessel.

The Turkish statement stressed that the marine space the Oruc Reis is set to explore “is located entirely within the Turkish continental shelf as declared to the United Nations and within the license blocks granted by Turkish Government to Turkish Petroleum Cooperation (TPAO) in 2012.”

Aksoy also noted that “our seismic research vessel Barbaros Hayrettin Paşa had also conducted a survey in previous years within a portion of the same area.”

Rebuffing Greek claims of Turkey “illegally conducting exploration activities on Greece’s continental shelf,” Aksoy said “Greece bases this claim on the presence of remote islands far from its own mainland, most notably Kastellorizo.”

“The argument that an island of 10 square kilometers, located only 2 kilometers away from Anatolia and 580 kilometers from the Greek mainland should generate a continental shelf area of 40.000 square kilometers is neither rational nor in line with international law,” noted the statement.

“We therefore reject these unjustified assertions of Greece,” the statement said.

Reiterating Turkey’s call for dialogue with Greece, Aksoy further stressed its determination to continue to defend its “legitimate rights and interests stemming from international law.”

Last May, Turkish-flagged drill ships began offshore drilling operations in areas off the island of Cyprus. The areas fall entirely within the Turkish continental shelf registered with the UN and in permit licenses the Turkish government in previous years granted to Turkish Petroleum, the country’s national oil company.

Turkey sees energy as an incentive for political resolution on the island and peace in the wider Mediterranean basin, not a catalyst for further tensions.

Turkey is a guarantor nation for the Turkish Republic of Northern Cyprus and has consistently contested the Greek Cypriot administration’s unilateral drilling in the Eastern Mediterranean, asserting that the TRNC also has rights to the resources in the area.

The decades since have seen several attempts to resolve the Cyprus dispute, all ending in failure. The latest, held with the participation of the guarantor countries – Turkey, Greece and the UK – came to an end without any progress in 2017 in Switzerland.