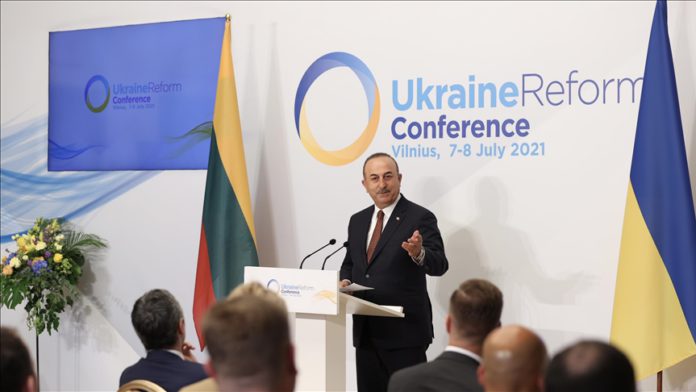 Speaking at the Fourth Ukraine Reform Conference in Lithuania’s capital Vilnius, Mevlut Cavusoglu voiced Turkey’s support and solidarity with Ukraine “on its path of reforms.”

“We want a Ukraine which relies strongly on its own people and is able to protect its sovereignty and territorial integrity,” said Cavusoglu.

Cavusoglu said overcoming the consequences of the Crimea and Donbass crises of 2014, which caused major political, security and economic challenges, will be much easier with a well-reformed Ukraine.

Russian forces entered the Crimean Peninsula in February 2014, and in March formally annexed the region – a move that Turkey, the UN General Assembly, US, and EU all view as illegal.

Fighting between Ukrainian government forces and pro-Russian separatists in Donbass, eastern Ukraine has seen more than 13,000 people killed since 2014, according to the UN.

Cavusoglu continued: “Despite these challenges, the Ukrainian government launched an ambitious reform agenda. There are two key elements to sustain these reforms: Simplicity and effective implementation.”

He also commended Ukraine’s parliament for passing a law on July 2 recognizing the Crimean Tatars as an Indigenous people, adding: “These steps enhance Ukraine’s integration efforts with the Euro-Atlantic family.”

Since Russia’s 2014 takeover of the peninsula, Crimea’s ethnic Tatars – struggling for Ukraine’s territorial integrity against Russian occupation – have faced persecution, a situation Turkey has decried.

Stating there is still room for growth, Cavusoglu said: “Reform is a constant effort. Because change is constant. Therefore, continuity is an essential element of a successful reform agenda. However, there are always internal and external challenges before reforms.”

“Protecting the rights of investors through a strong judiciary is important for a continuous FDI (foreign direct investment) flow. Fighting corruption is another critical issue. Oligarchization continues to be a serious challenge,” he added.

Cavusoglu also said that to build a stronger and more independent Ukraine, more cooperation with NATO is important.

The conference brings together Ukrainian and foreign government officials, representatives of the EU, NATO, and G7, and business and civil society.