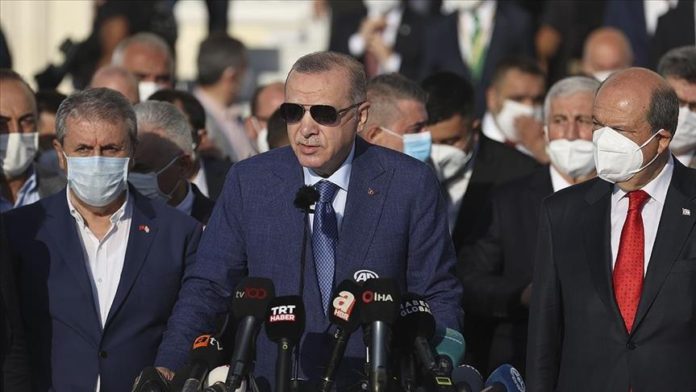 Turkey is considering operating a major airport in Afghanistan and Ankara is ready to discuss the Afghan peace process with the Taliban, the Turkish president said on Tuesday.

“By negotiating this process with the Taliban, just as the Taliban made some of the talks with the United States, the Taliban should hold these talks with Turkey much more comfortably,” Recep Tayyip Erdogan told reporters after offering Eid prayers in the Turkish Republic of Northern Cyprus (TRNC).

Erdogan is in TRNC on the 47th anniversary of Turkey’s Cyprus Peace Operation.

Referring to crucial Afghan peace talks in the Qatari capital Doha, Erdogan said: “I think we will make good use of this process. There are other alternatives (as well), and we are currently working on these alternatives.”

“Turkey is considering handling the operation of Kabul Airport,” if some conditions are met, he said.

“Now there is a new era,” Erdogan said, adding: “Three main authorities are seen here; NATO, the US, and Turkey.”

Noting that the US announced its decision to withdraw from the region, Erdogan said that Washington wanted Kabul Airport to be operated by Turkey as it had been doing so for several years.

“We are currently looking at this positively,” he said, adding but Turkey has “some conditions”.

“First, the US will be on our side at the point of diplomacy, in diplomatic relations,” Erdogan explained. “Secondly, [the US] will mobilize their means for us at the logistics point, and will transfer whatever power they have to Turkey in terms of logistics.”

Lastly, Erdogan said that Turkey will need “financial and administrative” support during this process.

Intense fighting between Afghan forces and the Taliban continues amid the withdrawal of foreign troops from the country. US President Joe Biden has said the US military mission in Afghanistan will conclude on Aug. 31.

Talks between the US and Turkey over security at the airport following the US pullout remain ongoing. Biden and his Turkish counterpart Erdogan discussed the issue at a recent NATO leaders’ summit in Brussels.