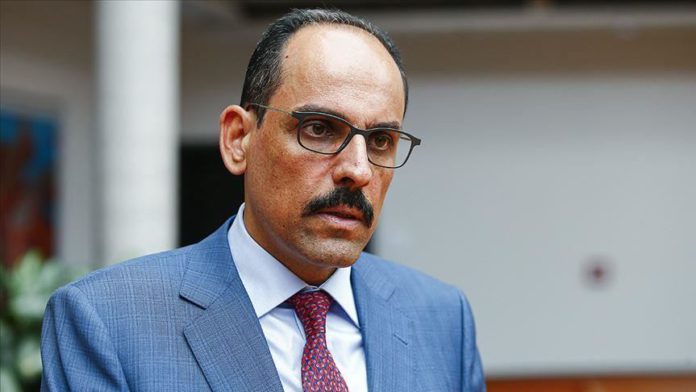 Turkish officials are ready to sit at the negotiating table with their Greek counterparts and discuss all regional issues which have led to an escalation between the two neighbors, Turkey’s Presidential Spokesman Ibrahim Kalin said on Tuesday.

At a TV program aired by CNN Turk, Kalin commented on a range of regional issues including the recent escalation in the Mediterranean and developments in Libya.

“In line with the instructions of our President [Recep Tayyip Erdogan], we are ready to discuss all issues; the Aegean, continental shelf, islands, airspace, research and screening efforts, and Eastern Mediterranean along with other bilateral matters with Greece without any precondition,” he said.

The Turkish spokesman went on to say that Greece was an important neighbor and regional disputes were triggered by loopholes in the law with regards to islands in the Aegean, the continental shelf and exclusive economic zone in the Eastern Mediterranean.

“There is no international legal definition regarding these,” he said, adding the international maritime law suggested such disputes should be resolved between conflicting countries.

The spokesman said the issue of the island of Cyprus was linked with the regional dispute, therefore both Turkish and Greek Cypriots should start negotiations for the disputed territories, and reiterated that Turkey was willing to turn the Eastern Mediterranean into a region of peace, not conflict.

Referring to Turkey’s recent NAVTEX in the region, he noted that Greece overreacted as if the Ankara administration was planning to invade the island of Meis, or Kastellorizo, however, the hydrocarbon research activities would be held 180 kilometers (112 miles) off the island.

When asked if Turkey’s seismic research activities in the Eastern Mediterranean would be halted for a month, he said the negotiations would continue and President Erdogan instructed authorities to wait for a while and see how talks would go.

According to the senior official, German Chancellor Angela Merkel played a constructive role following the NAVTEX crisis between Ankara and Athens, stating she sought to refrain from steps that might escalate the regional problems.

The conflict in Libya, where the internationally recognized Libyan government fights warlord Khalifa Haftar, was yet another topic Kalin commented on.

He said the political process in the war-weary country should proceed through legitimate, trustworthy actors and interlocutors.

“Our support to Libya’s Government of National Accord (GNA) will continue,” he said, adding the Libyan side was ready for a cease-fire, however, the terms of truce should be reasonable, legitimate and sustainable.

Libya has been torn by civil war since the ouster of late ruler Muammar Gaddafi in 2011. The GNA was founded in 2015 under a UN-led agreement, but efforts for a long-term political settlement failed due to a military offensive by forces loyal to warlord Haftar.

Turkey continues to support the internationally recognized government, but Haftar has been backed by Russia, France, Egypt and the UAE.

– Escalation between Azerbaijan and Armenia

When asked if Azerbaijan demanded anything from Turkey amid heightened tensions with Armenia, Kalin said the dispute between the conflicting sides dated back to 1992 and the Armenian side was an occupier.

According to the spokesman, Turkey attaches great importance to Azerbaijan’s unity, solidarity, and safety as the insurgency there could pose a threat to Turkey.

He said that President Erdogan informed his Russian counterpart Vladimir Putin of Turkey’s clear stance in this case, and urged him to use Russia’s bilateral ties with Armenia to reduce the tension.

He went on to say that Turkey will hold a military drill with Azerbaijan in line with the military security and cooperation deal reached earlier than the escalation, and stressed that Ankara would stand with Baku.

“…however, this does not mean that we shut down the doors of diplomacy,” he said, adding Erdogan’s discussion with Putin revolved around steps to reduce tension by working in harmony and starting negotiations.

The announcement of the military drill came days after an attack by Armenian armed forces on Azerbaijani troops in the northwestern Tovuz border region. At least 11 Azerbaijani soldiers — including a major general and a colonel — were martyred.

Over 53.65M coronavirus vaccine shots given in Turkey to date